To understand the war, we have to understand what motivated that generation of Americans not only to protest but also to fight, and later to seek some sort of closure. Wars are far easier to initiate than to conclude. And for those who serve, the memories endure long after the fighting stops.

At his inauguration in January 1961, President John Kennedy said, “Let every nation know, whether it wishes us well or ill, that we will pay any price, bear any burden, meet any hardship, support any friend, oppose any foe to assure the survival and the success of liberty.”

Those born after the boomers may find it quaint to read about a president asking citizens to sacrifice, to “pay any price.” Nonetheless, their parents or grandparents, the baby boomers, will most likely remember a brief shining moment of energized promise and of unfulfilled dreams. It was the echo of that call, just a few years later, that motivated hundreds of thousands of young men to enlist for Vietnam, for the chance to ensure “the success of liberty” — and many others back home, at least at the outset, to support the fighting.

In popular memory, the boomers quickly turned against the war. Many did, but many also served. Over 10 million boomers served in the military, some 40 percent of the males of their generation. Many of them served in Vietnam. More baby boomers died in Vietnam than went to Canada or to prison for refusing to serve. Those boomers in uniform were more blue-collar and minority than their generational median, but they were not some marginal part of it, nor were they the only ones to fight. So did college dropouts and graduates — and not only as officers. 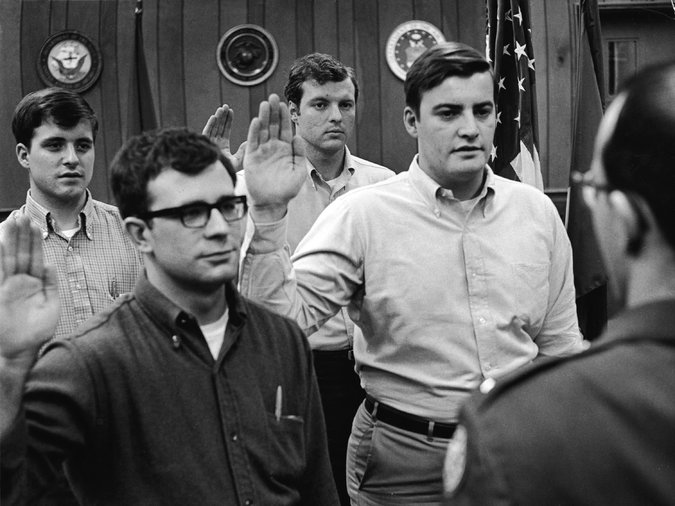 New recruits for the Vietnam War being sworn in, in St. Paul, Minn. CreditRohn Engh/FPG, via Getty Images

The profile of those who served was more complicated than their stereotype — the men and women in Vietnam were not defined by peace symbols and love beads, although some displayed them. They were not a group of mutinous draftees, although many were drafted, and if they did not begin their tour disillusioned by their war, they most likely concluded it with that view. They were not a band of rebellious “fraggers” assassinating their officers or marauding killers piling up body counts of the innocent in a haze of marijuana smoke.

They were soldiers and marines, sailors and airmen, doctors and nurses, who learned about survival, about protecting buddies, about cruel death. They witnessed the suffering of the Vietnamese and they served even when an ending to their war and a clear meaning for it seemed increasingly elusive. Their favorite song was the Animals’ recording of “We Gotta Get Out of This Place.” But when they did get out, their homecoming was often difficult and lonely. The impact of their indifferent, if not hostile, reception was all the greater because they had assumed the responsibility of citizenship they understood was theirs.

The baby boomer generation grew up in the world of the 1950s, a world of “duck and cover” drills in schools in preparation for a nuclear attack, of reminders of the threat posed by Soviet and Chinese Communism, of the fear of the near-inevitability of war, and of their obligation to serve in this war. It was a time of fear, but also an era of national confidence and of individual obligation. These children of World War II veterans learned their responsibility to serve when called — or to volunteer before being called.

The journalist Philip Caputo was a young Marine officer who went ashore with the first American combat units in Vietnam, in 1965. He recalled, “For Americans who did not come of age in the early 1960s, it may be hard to grasp what those years were like — the pride and overpowering self-assurance that prevailed.” When they marched across rice paddies, he said, they carried, “along with our packs and rifles, the implicit convictions that the Vietcong would be quickly beaten and that we were doing something altogether noble and good.”

Few could have anticipated the duration and cost of this commitment. Their leaders did not, although they were seldom honest about this. So when President Kennedy proclaimed at his inauguration that the torch had passed to a new generation, his World War II generation, it was a torch that few held very long. Within a few years, they quickly passed it along to their children.

In 1965, when President Lyndon Johnson sent in ground combat troops, there was criticism and dissent, but the dominant image was of young Americans taking a stand in the jungle, a heady sense of Americans defending the “free world.”

This changed as the numbers of troops grew, their casualties increased, as draftees made up more of the units, and as the rationale for the war and its conduct were more broadly challenged and unpersuasively defended. As Americans became disillusioned by the war, some of their sons and daughters, siblings and friends continued to go to Vietnam. To the protesters and critics, by 1967 the troops had become objects of pity for serving on a dangerous assignment in a cruel and unjust war.

In 1968, the chant from protesters was “Hey, hey, L.B.J. How many kids did you kill today?” But by late 1969, when Americans learned of the atrocities committed against an estimated 600 civilians at the village of My Lai, some protesters focused on those who were serving in Vietnam, not as victims but as willing participants in their cruel and unjust war. Johnson was back in Texas, and the young men serving now were the baby killers. Pity became contempt. More people probably knew Lt. William Calley, the man in charge at My Lai, than knew the name of any other combat officer who served in Vietnam. This left little room in the Vietnam narrative for stories of courage and sacrifice.

My Lai framed the image that for too many retrospectively described the Vietnam generation. Theirs was the “Apocalypse Now” war. That movie bore as little relation to the conduct and experience of the Vietnam War as “South Pacific” did to World War II — except the latter was kinder to those serving. An overwhelming majority of Vietnam veterans served honorably and bravely.

As Americans turned against the war, as political leaders danced around the subject, these young men and women slogged through it. Out in the field, Vietnam was a caldron of heat and humidity. It was about walking through jungles and rice paddies and elephant grass, and about being wet, infected and dirty. It was searching for elusive enemy forces while encountering Vietnamese civilians who just wished the Americans would leave and the war would end.

We cannot come to terms with the Vietnam War until we acknowledge the story of the generation who served there and understand the emotional complexity they confronted. In the years after the war, as civilians they have continued to serve their country and their world and to make a difference. Powerful, often unshared, memories remain.

Understanding this is essential: Those with responsibility to send the young to war need always to consider the enduring consequences of war and the human cost of undertaking this action. Winston Churchill, reflecting on the Boer War, understood it a century ago, and the Vietnam generation experienced it a half century ago. As Churchill wrote, “The Statesman who yields to war fever must realize that once the signal is given, he is no longer the master of policy but the slave of unforeseeable and uncontrollable events.” He argued, “Let us learn our lessons.”