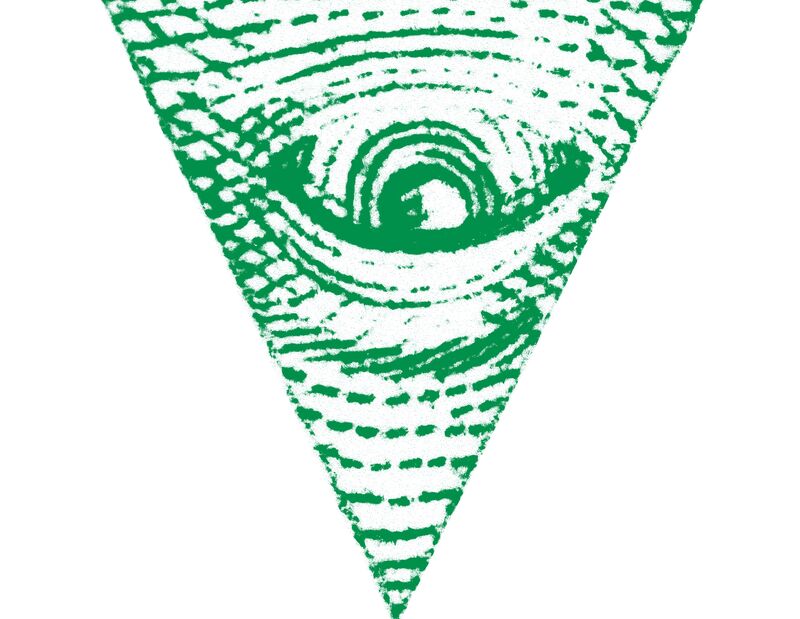 The incumbent international currency has been American for decades.

Is it time for regime change?

There’s a paradox at the heart of global finance.

The U.S. share of the world economy has drifted lower for decades, and now President Trump is retreating from the American chief executive’s traditional role as Leader of the Free World.

Yet the U.S. dollar remains, as the saying goes, almighty.

“American exceptionalism has never been this stark,” Ruchir Sharma, head of emerging markets and chief global strategist for Morgan Stanley Investment Management, said at a Council on Foreign Relations symposium on Sept. 24.

By the latest tally of the European Central Bank, America’s currency makes up two-thirds of international debt and a like share of global reserve holdings.

Oil and gold are priced in dollars, not euros or yen.

When Somali pirates hold up ships at sea, it’s dollars they demand.

And threats to be cut off from the dollar-based global payments system strike terror into the likes of Iran, North Korea, and Russia.

It’s no exaggeration to say that the dollar’s primacy is at least as valuable to the U.S. as a couple of aircraft carrier strike groups.

Now the dollar paradox shows signs of unraveling.
Political leaders who once accepted the dollar’s hegemony, grudgingly or otherwise, are pushing back.
Jean-Claude Juncker, the president of the European Commission, said in September that it’s “absurd” that European companies buy European planes in the American currency instead of their own.
In March, China challenged the dollar’s dominance in the global energy markets with a yuan-denominated crude oil futures contract.
Russia slashed its dollar holdings this year, claiming (inaccurately) that the greenback is “becoming a risky instrument in international settlements.”
And French Finance Minister Bruno Le Maire told reporters in August that he wants financing instruments that are “totally independent” of the U.S., saying, “I want Europe to be a sovereign continent, not a vassal.”

This disturbance in the force isn’t good news for the U.S.

The dollar’s preeminent role in global finance is an “exorbitant privilege,” as Valéry Giscard d’Estaing, then France’s finance minister, said in 1965.

If the dollar loses its central role—to be sure, not an imminent threat—the U.S. will be more vulnerable when there’s a loss of investor confidence.

The Federal Reserve might even have to do what other nations do when global investors panic: jack up interest rates to painful levels to keep speculative money from flowing out.

As it is now, when trouble breaks out, investors flood into U.S. markets seeking refuge, oddly enough even when the U.S. itself is the source of the problem, as it was in last decade’s global financial crisis.

A slippage in the dollar could also be viewed as a symptom of U.S. isolationism.

“In a hypothetical scenario where the U.S. withdraws from the world,” damage to the dollar’s standing could cause average U.S. interest rates to rise by 0.8 percentage point, according to a December paper by Barry Eichengreen of the University of California at Berkeley and two researchers from the European Central Bank.

While any serious erosion of the dollar’s status would take years, the U.S. can’t take its preeminence for granted, says Eichengreen: “Being the incumbent international currency is an advantage, but it’s not the only thing that matters.”

The most immediate risk to the dollar is that the U.S. will overplay its hand on financial sanctions, particularly those against Iran and countries that do business with Iran.

In May the Trump administration withdrew from the 2015 deal that eased sanctions on Iran in exchange for that country’s promise to stop certain nuclear activities.

The U.S. will reimpose sanctions on Nov. 4 and is successfully pressuring companies outside the U.S. not to do business with Tehran.

European companies and banks could be punished by the U.S. if they inadvertently transact with sanctioned Iranian groups such as the Islamic Revolutionary Guard Corps.

European leaders, in response to what they perceive as an infringement on their sovereignty, are openly working on a payments system that would enable their companies to do business with Iran without getting snagged by the U.S. Treasury Department and its powerful Office of Foreign Assets Control.

One idea is to set up a government-funded organization, which would be less vulnerable to U.S. actions than a private company or bank, to arrange exchanges of Iranian oil for products from Europe and possibly Russia and China as well.

French officials say the transactions might be structured as barter to avoid involving banks.

“We cannot accept as Europeans that others, even our closest allies and friends, determine who we can do business with,” Federica Mogherini, the European Union’s foreign policy chief, said at the Bloomberg Global Business Forum on Sept. 26.

The Europeans’ progress has been slow, so there won’t be anything ready in time to alleviate the sanctions taking effect in November, says Carsten Brzeski, a former European Commission official who’s now chief economist of ING-DiBa, the German branch of the Dutch banking company ING Group.

He needled, “So we will be watching the development of this structure that doesn’t exist yet and has no target date to be created.”

Still, Bolton may come to regret his dismissiveness.

Even if Europe’s workaround isn’t ready for prime time, it needs to be viewed as part of the widespread dissatisfaction with the dollar’s dominance.

That dissatisfaction is only mounting.

In 2016, Jacob Lew, then-President Obama’s secretary of the Treasury, warned in a speech at the Carnegie Endowment for International Peace that “overuse of sanctions could undermine our leadership position within the global economy and the effectiveness of our sanctions themselves.”

Broad support is best, he said.

He added that the U.S. “must be prepared to offer sanctions relief if we want countries to change their behavior.”

Trump’s reinstitution of sanctions against the wishes of the coalition partners, without clear evidence that Iran has meaningfully broken its commitments, appears to violate both of Lew’s principles. (A spokeswoman said Lew wasn’t available for comment.)

Even Mark Dubowitz, chief executive officer of the Foundation for Defense of Democracies, which favors action against Iran, says that “there’s always risk of overuse of a single instrument. … You need covert action, military, a regional strategy, political and information warfare.”

The best thing the dollar has going for it is that its challengers are weak.

The euro represents a monetary union, but there’s no central taxing and spending authority.

Italy’s recent woes are only the latest challenge to the euro zone’s durability.

China is another pretender to the throne.

But China’s undemocratic leadership is wary of the openness to global trade and capital flows that having a widely used currency requires.

In a December interview with Quartz news site, Eichengreen said, “Every true global currency in the history of the world has been the currency of a democracy or a political republic, as far back as the republican city-states of Venice, Florence, and Genoa in the 14th and 15th centuries.”

On the other hand, the U.S. is hardly alluring these days.

“When does the rest of the world turn to the U.S. and say, ‘What have you done for me lately?’ ” Beth Ann Bovino, chief U.S. economist of S&P Global Ratings, asked on Sept. 30 at the annual meeting of the National Association for Business Economics in Boston.

The biggest long-term challenge to the dollar’s standing is what economists term the Triffin dilemma.

Belgian-American economist Robert Triffin observed in 1959 that for the U.S. to supply dollars to the rest of the world, it must run trade deficits.

Trading partners stash the dollars they earn from exports in their reserve accounts instead of spending them on American goods and services.

Eventually, though, the chronic U.S. trade deficits undermine confidence in the dollar.

This is what forced President Richard Nixon to abandon the dollar’s convertibility to gold in 1971.

Harvard economist Carmen Reinhart cited the dollar’s Triffin dilemma at the Boston business economists’ meeting.
“Now you say, well, that’s not a problem, our debt is not backed by gold,” she said. “But our debt, and anybody’s debt, is ultimately backed by the goods and services that an economy produces.”
And, she noted, “our share of world [gross domestic product] is shrinking.”

When Giscard d’Estaing coined the phrase “exorbitant privilege,” he was referring to the fact that the U.S. gets what amounts to a permanent, interest-free loan from the rest of the world when dollars are held outside the U.S.

As Eichengreen points out, it costs only a few cents for the U.S. Bureau of Engraving and Printingto produce a $100 bill, but other countries have to pony up $100 worth of actual goods and services to obtain one.

Dollars that foreigners willingly accept and trade among themselves are like little green IOUs to the rest of the world.

They allow Americans collectively to consume more than they produce—to live beyond their means.

The downside to America’s privilege is that the foreign demand for dollars raises the exchange rate, making American products less competitive in world markets.

Especially in slack times, American workers can be thrown out of work when the U.S. imports products that could have been made domestically.

And the accumulation of dollars outside the U.S. represents a transfer of wealth to other countries.

If other countries suddenly decide to use their dollars to buy American goods and services, the U.S. will suddenly have plenty of work to do—but consumers will have to switch from living beyond their means to living beneath their means.

On the whole, though, U.S. leadership benefits from having a currency that’s in great demand.

The issue is how to keep the dollar the favored currency of the world.

Preserving diplomatic alliances is one way.

Eichengreen’s research finds that countries that rely on the U.S. nuclear umbrella (Japan, Germany) have a much bigger share of dollars in their foreign exchange reserves than countries that have their own nukes, such as France, apparently because they feel their dollar dependence tightens their military protector’s ties to them.

Another way is to make dollars freely available as needed to trading partners, as the Federal Reserve did via “swap lines” during the global financial crisis under Chairman Ben Bernanke.

And yet another is to refrain from using the dollar’s dominance as a cudgel against allies.

As Lew said in 2016, “the more we condition use of the dollar and our financial system on adherence to U.S. foreign policy, the more the risk of migration to other currencies and other financial systems in the medium term grows.”

One thought on “..The Tyranny of the U.S. Dollar…”