But that was the easy part. 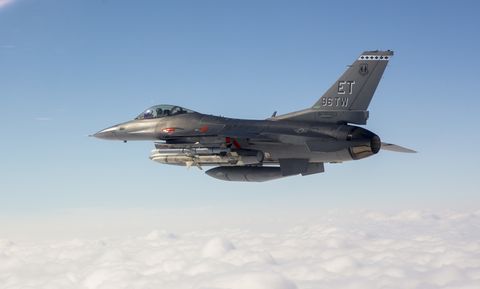 Finding the missile was much, much harder.

enterprise—as long as you can find it.

The service used the guided version of a common 70-millimeter rocket to destroy the simulated threat in flight.

According to Air Force Magazine, the test was carried out on December 19 by the 85th Test and Evaluation Squadron based at Eglin Air Force Base in Florida.

An F-16 used a GR-20A Advanced Precision Kill Weapon System, or APKWS, to shoot down a target drone.

The weapon was fired from a rocket pod carried by the fighter jet and guided to the target by the airplane’s onboard targeting pod.

The actual DoD footage of the test consists of just the rocket leaving the F-16, so here’s a meatier video of APKWS deployed on a Marine Corps Harrier fighter

APKWS was developed in the 2000s by adding a laser-seeking guidance system and maneuvering fins to the 70-millimeter Hydra 70 rocket.

Hydra 70s are typically fired by aircraft in salvos of multiple rockets to ensure blanketing the target with explosive effects.

A single rocket would likely disable an enemy light armored vehicle, but the Hydra 70 is an unguided weapon and a salvo has a better chance of hitting

a vehicle than a single rocket.

instead of expending them on a single target. 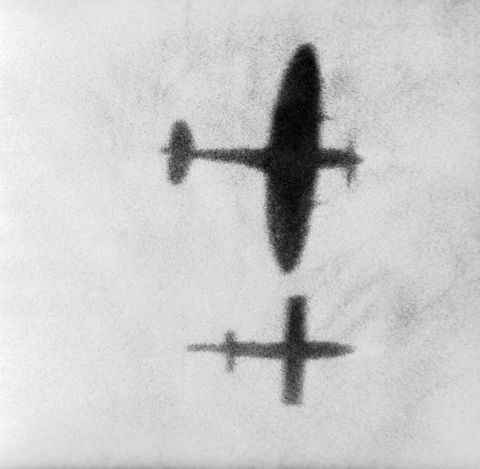 A Supermarine Spitfire knocking a V-1 off course by nudging the missile with its wings.

Subsonic guided missiles like cruise missiles are relatively easy to shoot down.

In World War II, Allied fighters like the British Spitfire shot down Hitler’s V-1 missiles, an early example of the cruise missile, with simple machine guns

—or even knocked them off course by nudging them with their wings.

APKWS costs about $25,000 a rocket—a bargain in today’s world of gold-plated defense equipment.

The AMRAAM medium range air-to-air missile, on the other hand, costs upward of $1 million.

AMRAAM is an excellent missile, but it’s also overkill for a non-maneuvering target.

Another benefit of using APKWS:

While a F-16 typically carries just four AMRAAMs, APKWS is carried in pods with up to 19 missiles per pod.

An F-16 carrying two such pods could shoot down a dozen or more cruise missiles in a single flight. 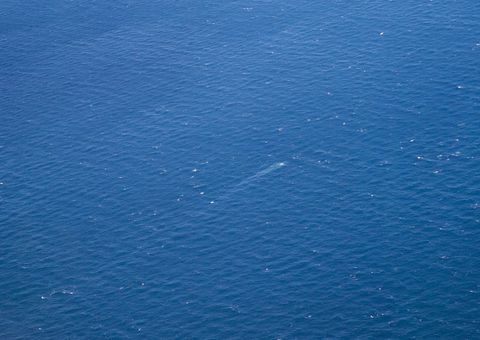 Debris from the target drone floating in the Gulf of Mexico.

Cruise missiles like the American Tomahawk have been around since the 1970s, but until very recently, the only cruise missiles used in action

have been American missiles.

that cruise missiles could someday be used against American forces.

Cruise missiles trade speed for the ability to fly low, under the beams of enemy radar systems.

Many fly low enough that they are only detectable by conventional ground-based radars at distances of 30 miles or less—or about three minutes’ flight time.

This gives defenders on the ground little time to react to their threat.

The hard part of the cruise missile threat is actually detecting them.

As last week’s test demonstrates, shooting them down is the easy—and relatively inexpensive—part.