I don’t wish to spend much time deconstructing what was going on in the president’s mind.

peaceful protesters in other places in the days that followed.

For all the genuinely moving moments of police kneeling and thoughtful engagement in the complexity of dissent,

there seemed to be a clear national uptick after June 1 in police throwing demonstrators to the ground,

and threatening protesters with moving vehicles.

Gugino stumbled backward and fell, hard, onto the pavement, fracturing his skull.

He lay there with blood flowing profusely in a pool around his head.

Later, after help finally came, he was hospitalized (and remained so two weeks later, in serious condition).

But remarkably, help was not immediately forthcoming.

A spectator with a smartphone captured the episode; the video showed an entire squadron of police, including the officers

who shoved him, walking past Gugino’s supine form.

Not one of them came to his aid. Instead they moved on like a school of fish or a pack of wild horses gliding around a big

stump in the ground. It is a shocking video.

The push itself was both brutal and careless, the response even more so.

Yet there was a notable moment in the video when one officer hesitated, seemed to waver.

But just then, another officer put his hand on his shoulder and signaled him to keep moving.

That brief turn toward the injured man was the tiniest shimmer of movement, lost as quickly as it came, as the herd moved on.

This was the moment of crisis when the internalized voices of our leaders, mentors, teachers, and friends should insert

themselves for a nudge toward goodness.

It is precisely the instant when one might wish for better angels rather than avenging scolds to intervene.

Take your knee off his neck.

Don’t step over an unconscious body in your role as a guardian of public safety.

Indeed, in the video, the officers seemed transfixed by the groupthink of staying together, an orderliness that overrode

were there to do.

Too busy to look down or look back, they couldn’t stop to heal or to recognize actual vulnerable civilian circumstance as part

This brusque triage of concern is the downstream application of a state of mind that treats public ground as a “battle space,”

as Secretary of Defense Mark Esper urged the governors during the group phone call of June 1.

That logic of war was made even more apparent in short order:

After the two officers who shoved Gugino were suspended and charged with second-degree assault,

As John Evans, the president of the local Police Benevolent Association, told The Buffalo News, “Our position is these

They were simply doing their job.

He did slip in my estimation.

It is easy to pick up on the casual cruelty of those individuals who are just “following orders.”

What is subtler and more complex is the corollary, expressed by Roger Berkowitz in a New York Times reflection on Hannah

Berkowitz wrote that the harder cases are those when people act “not as a robotic bureaucrat, but as part of a movement.”

They “commit themselves absolutely to the fictional truth of the movement…. It is this thoughtless commitment that permits

name of saving the world.” 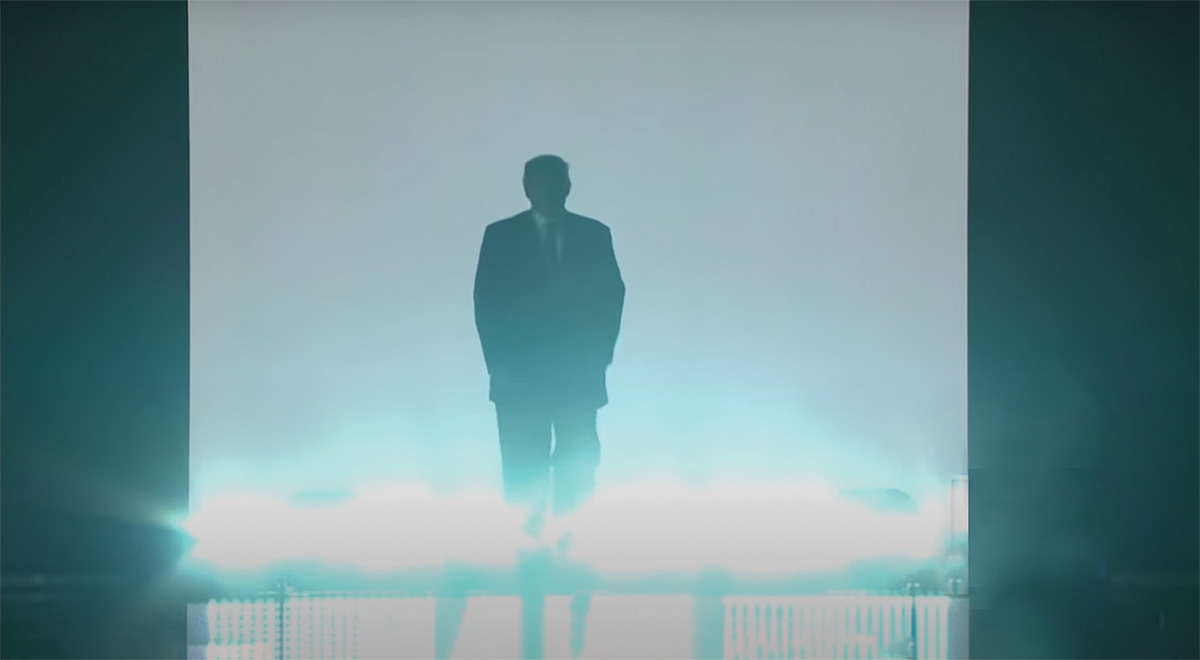 Out of darkness: Trump’s entrance at the 2016 Republican National Convention was a stage-managed spectacle with smoke,

As though to complete the circle and reinforce this ethic of good-soldierly dominance, Trump lost no time endorsing the

Buffalo officers’ mass resignation, tweeting a completely unsubstantiated theory that Gugino “could be an ANTIFA

(This is not an accusation to be taken lightly; in declaring those associated with antifa as terrorists,

and interference by the FBI, CIA, and other spy agencies.)

The president’s tweet concluded, “I watched, he fell harder than was pushed.

Could be a set up?” Although the FBI and the Department of Justice have, to date, announced no arrests of protesters linked

to antifa ideology or groups, Attorney General William Barr suggested on Fox News that the lack of cases

“does not mean they haven’t been involved in the violence.”

protester, human rights advocate and overall fan of the US Constitution.”

“I think it would be best if the president did not comment on issues that are before the courts.”

Meanwhile, we must wonder what will happen to our collective consciousness by then.

We must treat this sleight of hand with the seriousness it deserves.

color have been experiencing for generations.

But we have been here before, if not to the same degree, yet over and over, what seems to be seen becomes unseen,

moral templates to be reenacted elsewhere, familiarized as normative baselines are reset.

Trump explicitly endorses an ethic that urges officers not to be “too nice” when making an arrest.

weakness and restraint in governance is acting like a fool.

The president praises extraordinary shows of force, seemingly driven by no higher morality than the pure vanity of wanting

to appear invincible, the question of proportion a superfluity.

If we are ever to return merely to the flawed life we once had, let alone drag ourselves into the better world we hope to inhabit

in the future, we must profoundly reappraise political appeals to magical thinking.

There are no miracles.

There are no gods among us.

Once we had a Constitution.

We all saw it.

Then it’s time we stop wringing our hands and intercept that Oz-like strange joker as he sidles for the door.

We cannot let him abscond with something so precious hidden up his sleeve.