The Republican Party isn’t ready to walk away from the former President, but the senators know how close the 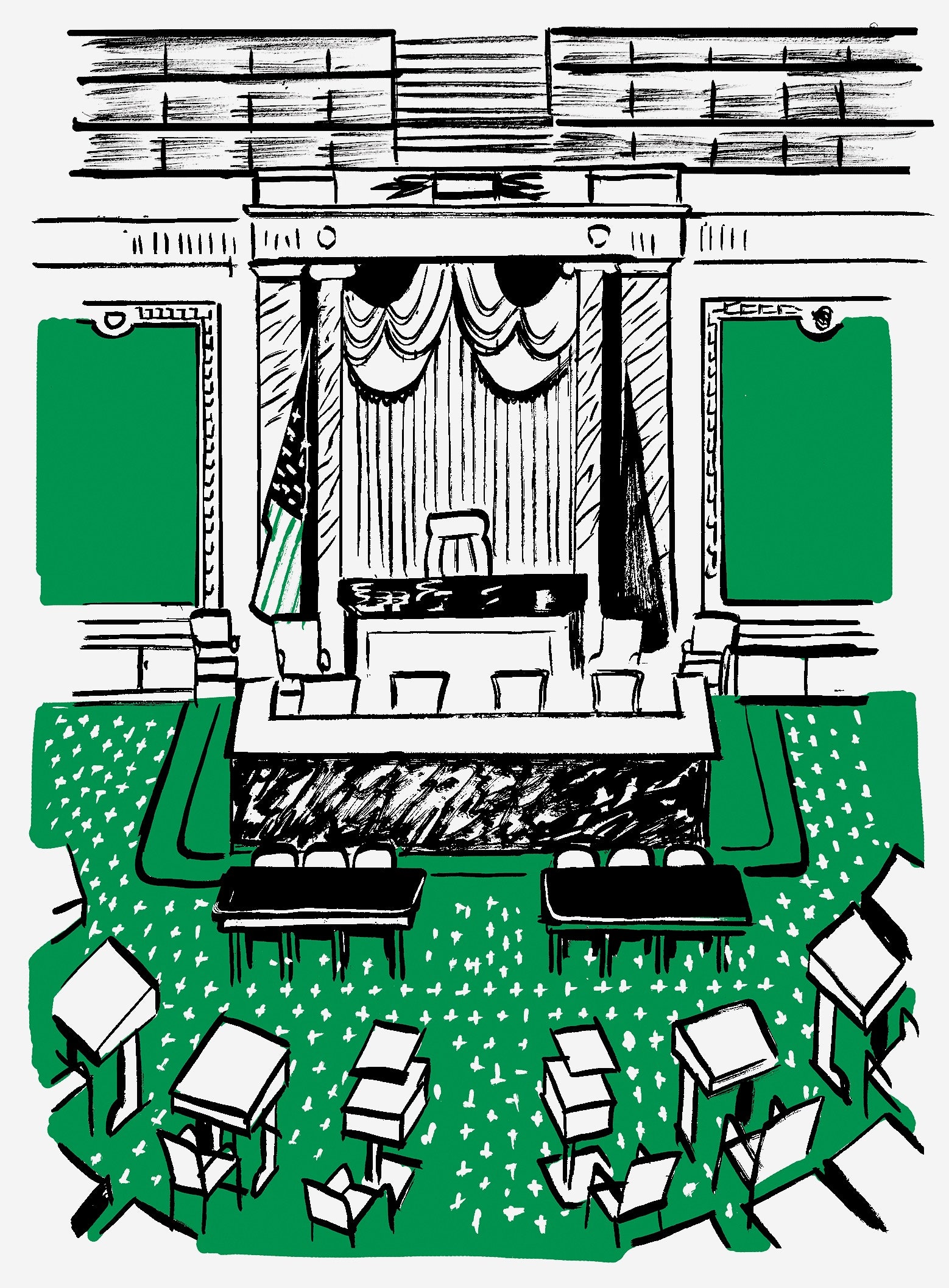 As President, Donald Trump often seemed surprised to discover what was and was not constitutional.

His lawyers now seem intent on perpetuating that confusion at his impeachment trial.

Last week, one of them, David Schoen, said in an interview with Fox News that “fair-minded people” don’t support using impeachment to “bar someone from running for office again”

—even though that is one of the two punishments for conviction that the Constitution specifies.

Schoen also issued a challenge: if there is an attempt to call witnesses in the trial, “you also should be able to call, then, many of the senators as witnesses,

because of the awful bias and prejudgment they’ve shown.”

It wasn’t clear which senators Schoen had in mind—Mitt Romney, the Utah Republican, who, in the midst of the assault on the Capitol, on January 6th, said that Trump had caused “this insurrection”?

The Senate’s rules allow its members to be impeachment witnesses (and to have a say in what witnesses to call), and any number of them might offer vivid descriptions of the violence,

which Trump is accused of inciting.

But such accounts can hardly be what Schoen is after.

As he said on Fox, he didn’t think that, at the trial, the House managers should show videos documenting how Trump’s followers, after the President told them at a rally earlier that day to go

to the Capitol and “fight like hell,” did just that.

“Why does the country need that now?” Schoen asked.

His goal, it seemed, was to put the senators on trial instead.

Three days after Schoen’s interview, Representative Jamie Raskin, of Maryland, the lead manager, sent a letter to Trump inviting him to testify.

A hostile witness can be helpful.

(His lawyers called the letter a “public relations stunt.”)

Trump would find a trial, where he is subject to cross-examination, to be a very different experience than Twitter.

His no doubt outrageous claims would make the stakes plain, perhaps even to Republicans.

As Raskin noted, Trump and his defenders continue to dispute even the basic facts of the events surrounding the attack on the Capitol.

In a fourteen-page pretrial brief that Schoen and his co-counsel, Bruce Castor, filed last week, they deny that Trump’s imprecations to the crowd were anything but a general statement about election

security, or that he asked the Georgia secretary of state to “find” enough votes to give him the state—although that exchange, an apparent election-law violation, is on tape.

Trump, as depicted in the brief, is a peace-loving, free-speech martyr.

Trump brought in Schoen and Castor just a week before the trial’s opening, after parting ways with his previous team.

The new lawyers have said that their defense wouldn’t focus on Trump’s lies about the election being stolen from him, but those falsehoods are given respectful treatment in their brief.

Schoen has spoken of representing “reputed mobster figures,” and had been in discussions with Jeffrey Epstein, the sexual abuser, before he killed himself in jail.

(Schoen says he was murdered.)

Castor, a former district attorney in Montgomery County, Pennsylvania, declined to prosecute Bill Cosby for sexual assault, and later sued one of Cosby’s victims for defamation.

(The case was dismissed.)

Perhaps the attorneys’ experiences have prepared them to juggle improbable excuses for Trump’s behavior.

In their brief, they write that, since Trump is no longer President, the impeachment trial is “a legal nullity.”

In fact, there is strong support for post-Presidential proceedings in constitutional history and in precedent; otherwise, there would be no real penalty for a late-in-the-term coup attempt.

(What’s more, Trump was President on the day he was impeached; only the trial is occurring in his post-Presidency.)

The Constitution also gives the Senate great latitude in running a trial.

But the nullity argument, as flimsy as it is, has come to be seen as a safe harbor by Republicans who want to forget that January 6th ever happened.

Senator Rand Paul earlier sought a dismissal of the case on that ground, and, in a procedural vote, only five Republicans joined Democrats to kill his motion.

At least seventeen Republican votes are needed to convict Trump.

Those numbers show how crucial it is that the House managers present a forceful case: Trump’s party is not ready to walk away from him.

One of the topsy-turvy arguments that Trump’s defenders, including Senator Lindsey Graham, are making is that the evidence that some people in the mob arrived in Washington already intent

on engaging in violence exonerates the President.

How, they ask, could he possibly have incited them, if they’d already decided to try to lynch Nancy Pelosi and others?

One answer lies in the House managers’ seventy-seven-page pretrial brief, which charges Trump with “a course of conduct aimed at subverting and obstructing the election results”

in the weeks leading up to the rally.

The managers cite a December 19th tweet from Trump calling on his supporters to come to Washington—“be there, will be wild”—and his telling a crowd in Georgia on January 4th that it was imperative to

“fight” to hold the White House.

He made it clear that the task at hand was to intimidate Vice-President Mike Pence, whom Trump had directed, both publicly and, reportedly, in meetings behind closed doors, to throw out electoral votes,

in violation of the Constitution.

(Even after the mob had breached the Capitol, and began searching for the Vice-President, Trump tweeted, “Mike Pence didn’t have the courage to do what should have been done.”)

Pence would be a good witness.

So would aides who reportedly pleaded with Trump to take quick action to protect the Capitol, and found him uninterested.

The managers, in their brief, call his failure to act a “dereliction of duty.”

In many instances, Trump was invoking the power he had as President.

It is not the case then that, as Castor argued last week, we are going through an impeachment trial “just because somebody gave a speech and people got excited.”

It is true that senators will be judged by what they do and say at the trial.

The House managers wrote that Trump was “singularly responsible” for unleashing a violent attack on a joint session of Congress, with the aim of disrupting the transfer of power.

The senators, under the Constitution, now have a singular responsibility to render a verdict on Trump’s actions and, by extension, on whether an attempt to overturn an election can be brushed aside.

Senators saw how close the country came to catastrophe because of Trump.

And they should know what their job is now. ♦

Amy Davidson Sorkin has been a staff writer at The New Yorker since 2014.
She has been at the magazine since 1995, and, as a senior editor for many years, focussed on national security, international reporting, and features.