The year 2021 marks the 100th anniversary of the Oklahoma race massacre known as the Tulsa Massacre, which resulted in the death of more than 300 Black Americans

and the total destruction of 40 blocks of a Black residential neighborhood and business district called Greenwood and nicknamed Black Wall Street.

And while news spread across the US about this tragedy at the time, an ensuing culture of silence won over, so much so that future generations of Americans

—even Tulsans—would never know its history.

It was only in 2002 the Oklahoma Education Department added lessons about the massacre to its curriculum.

These, among many other historical and important reasons, are why it’s time all of us better know the history of what are popularly referred to as Black Wall Streetand the Tulsa Massacre.

Educate yourself further on Black history by starting with these essential terms.

What was Black Wall Street?

But many others only learned about these important, and sadly forgotten, parts of American history after President Donald Trump was widely rebuked for insensitively scheduling his first

campaign rally since the COVID-19 pandemic in the city of these historic episodes, Tulsa, Oklahoma—and on Juneteenth of all days, a holiday commemorating the emancipation

While HBO’s Watchmen, an adaptation of an influential comics series, showcased the Tulsa Massacre in Black Wall Street, it also presented an alternative future of its aftermath,

imagining a utopia springing up from the destruction.

The community is rebuilt, reparations are paid, Black businesses and intergenerational wealth thrive, and Black people are protected from future harm.

In the late 1800s and early 1900s, Tulsa, Oklahoma became a boom town after oil was discovered in lands in what was called Indian Territory.

People associated with the oil business accumulated some level of wealth, including Indigenous and Black landowners.

And with the oil boom came a population boom.

In downtown Tulsa, a Black residential neighborhood and business district called Greenwood became one of the wealthiest Black communities in the US

—and a model of economic success.

This success was due to Black ingenuity and innovation but also because segregation, in fact, enabled the community to reinvest its own money, increasing its overall wealth.

And Greenwood became so prosperous that the legendary educator Booker T. Washington, as he is widely credited, first referred to the district as “Negro Wall Street”

—Black Wall Street today, as the term negro is offensive.

Wall Street, in southern Manhattan in New York City, has long been the major financial center of the US, home to the two largest stock exchanges in the world.

What was the Tulsa Massacre?

Many white people in Tulsa were bitter and jealous about Black people’s wealth and land ownership—and Greenwood was a lightning rod of their hate.

Some poorer white residents felt Black people should have an inferior socioeconomic status.

A 19-year-old Black man named Dick Rowland went to the top floor of the Drexel building, which had the only bathroom Black people could use downtown.

In the elevator, it’s believed Rowland stumbled and fell onto the elevator operator, a 17-year-old white teenager named Sarah Page.

Accounts report that Page screamed, Rowland fled to Greenwood, and a clerk in the building called the police, thinking Rowland had assaulted Page.

Rowland was arrested the next day after a brief investigation.

But the Tulsa Tribune newspaper ran a story with the headline “Nab Negro for Attacking Girl in Elevator” that heightened tensions.

The paper is also said to have run an editorial (original copies were destroyed) called “To Lynch Negro Tonight,” that helped inspire a white mob to gather around the courthouse

and demand the sheriff hand over Dick Rowland.

Black veterans and Greenwood businessmen and community leaders arrived, armed, at the courthouse and offered to help protect Rowland from the lynch mob.

They were rebuffed, and the growing mob was outraged at their presence.

As the Black organizers were leaving, witnesses said a white man tried to grab the rifle of a Black man.

As some white men rushed to the armory to secure more guns, the Black organizers retreated back to Greenwood, positioning themselves along the railroad tracks

to defend their community.

They were successful, but only for a period of time that night in gunfire exchanges.

Some white Tulsans who had been “deputized” by the sheriff were effectively licensed to kill.

Others sent telegrams or drove to nearby towns to spread news claiming Black Tulsans were instigating an uprising.

By the morning of June 1, the white mob had stirred up an all-on riot on Greenwood.

Witnesses reported white people looting homes and businesses to steal whatever suited them and then setting them on fire.

And as a famous photo documents, the white mob literally aimed to “run the Negro out of Tulsa.”

As the fires burned and murders mounted, the National Guard arrived to disarm, arrest, and march Black Tulsa men through the city streets before detaining them at the convention hall.

Some women and children were taken away from their homes to the Tulsa outskirts for their safety.

In the end, more than 300 Black people were killed, the 40 blocks of Greenwood were completely destroyed, and thousands of homes and businesses were burned down

to their chimneys and bedframes. 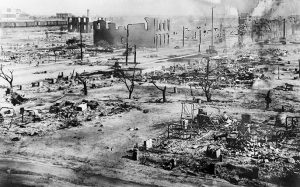 Many Black Tulsans did rebuild, but largely without any government assistance. Oklahoma Senator Kevin Matthews describes the secrecy surrounding the massacre as a

A Tulsa native, Matthews was in his 30s before he learned about the attack on Greenwood.

Undoing the erasure of Black history

Other communities in the US, such as in Durham, North Carolina—which bears a historical marker for its reputation for Black entrepreneurship—have been called Black Wall Street.

And in 2009, rapper The Game (Jayceon Taylor) released his debut album Black Wall Street, in an apparent nod to the Greenwood District,

and (now defunct) record label of the same name.

Whether justice will be served for the victims and survivors of the Tulsa Massacre of 1921 is still unknown.

But the silence about the Tulsa tragedy and destruction is finally being abolished.

The city of Tulsa has erected monuments, statues, plaques, and parks to honor Greenwood, past and present, though the original layout of the community has changed

since it was destroyed.

Learning about the history of Greenwood is now required in Tulsa schools.

There is even a Black Wall Street board game, which teaches both Black history and financial literacy.

Spearheaded in part by such luminaries as LeBron James, Russell Westbrook, and Dream Hampton, major studio productions have been announced for the 100th anniversary of the Tulsa

Massacre—at last being acknowledged as one of the worst incidents of domestic terrorism in US history.

One production is a documentary by the great Stanley Nelson, of Freedom Riders and The Black Panthers: Vanguard of the Revolution fame.

Along with a growing cadre of books and articles on the subject, discover more in the powerful exhibitions from:

Also, this year, The Oklahoman published a comprehensive history on the Tulsa Massacre that also focuses on the legacy of the Greenwood community

and its success prior to its destruction. Access the articles here.

The New York Times has created a 3-D model of Greenwood at its height.

If you’d like to learn more, the official 2001 report by the Oklahoma Commission to Study the Tulsa Race Riot of 1921 is here.

Black Wall Streets can and should thrive all over the US today. But we can’t forget the cultural and economic legacy of the freedom-loving people in a place called Greenwood.

Kimberly C. Ellis, Ph.D. (@DrGoddess) is an American and Africana Studies Scholar. She has served as Expert Literary and Historical Consult to secure reparations for the Tulsa survivors and testified before Congress to that end. Ellis created the “All Eyes on Tulsa” digital campaign and the first “twecture” on Tulsa, which has been shared in classrooms across the US. Look out for her scholarly memoir on Tulsa and the road to reparations, scheduled for release in spring 2021 for the 100th Anniversary of the massacre. She lives on Twitter, Instagram and at her website, DrKimberlyEllis.com.