….one of our favorites from the past week was Supreme Court Justice Ruth Bader Ginsburg tearing trump up with some…. off the cuff ….and some say after a few pops…..truth about the manchild drumpf……

Washington (CNN)Supreme Court Justice Ruth Bader Ginsburg’s well-known candor was on display in her chambers late Monday, when she declined to retreat from her earlier criticism of Donald Trump and even elaborated on it.

“He is a faker,” she said of the presumptive Republican presidential nominee, going point by point, as if presenting a legal brief. “He has no consistency about him. He says whatever comes into his head at the moment. He really has an ego. … How has he gotten away with not turning over his tax returns? The press seems to be very gentle with him on that.”

“I can’t imagine what this place would be — I can’t imagine what the country would be — with Donald Trump as our president,” she had said in the Times interview published Monday.
Trump responded Wednesday morning by calling on Ginsburg to resign.
“Justice Ginsburg of the U.S. Supreme Court has embarrassed all by making very dumb political statements about me. Her mind is shot – resign!” Trump tweeted.

It is highly unusual for a justice to make such politically charged remarks, and some critics said she crossed the line. House Speaker Paul Ryan told CNN’s Jake Tapper on Tuesday night the comments were “out of place.”

“For someone on the Supreme Court who is going to be calling balls and strikes in the future based upon whatever the next president and Congress does, that strikes me as inherently biased and out of the realm.”
Having met with Ginsburg on a regular basis for more than a decade and sometimes been struck by her frankness, I found her response classic. The 83-year-old justice expressed no regret on Monday for the comments or surprise that she would be criticized. Any disbelief she expressed stemmed from the fact that Trump has gotten so far in the election cycle.

Chief  John Roberts’ game of chess
“At first I thought it was funny,” she said of Trump’s early candidacy. “To think that there’s a possibility that he could be president … ” Her voice trailed off gloomily.
“I think he has gotten so much free publicity,” she added, drawing a contrast between what she believes is tougher media treatment of Democratic candidate Hillary Clinton and returning to an overriding complaint: “Every other presidential candidate has turned over tax returns.”
Ginsburg was appointed to the high court by President Bill Clinton in 1993, and is now the senior member of the liberal wing and leading voice countering conservative Chief Justice Roberts. She has drawn a cult-like following among young people who have nicknamed her The Notorious R.B.G., a play on American rapper The Notorious B.I.G.

Meet the woman who got a Supreme Court justice tattooed on her arm 02:20
I have witnessed her off-bench bluntness many times through the years.  During 2009 oral arguments in a case involving a 13-year-old Arizona girl who had been strip-searched by school administrators looking for drugs, she was troubled that some male justices played down any harm to the student. “They have never been a 13-year-old girl,” Ginsburg told me. “It’s a very sensitive age for a girl. I didn’t think that my colleagues, some of them, quite understood.”

Earlier in 2009, she was being treated for pancreatic cancer yet made sure to attend President Barack Obama’s televised speech to a joint session of Congress, explaining that she wanted people to know the Supreme Court was not all men. “I also wanted them to see I was alive and well, contrary to that senator who said I’d be dead within nine months.” She was referring to Sen. Jim Bunning, a Kentucky Republican, who had said she would likely die within nine months from the pancreatic cancer. Bunning later apologized.
It was evident in our interview on Monday that when Ginsburg imagines who would succeed Obama, she does not expect Trump to prevail over Clinton.
Acknowledging her own age and that Justices Anthony Kennedy and Stephen Breyer will turn 80 and 78, respectively, Ginsburg said of the possible next president: “She is bound to have a few appointments (to the Supreme Court) in her term.”

CNN’s Manu Raju and Jeremy Diamond contributed to this report. 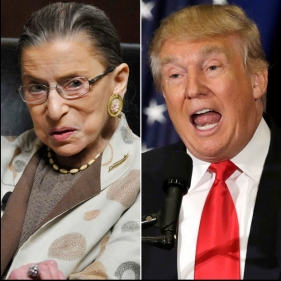 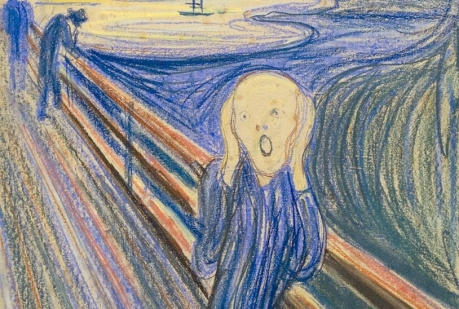 ….I love the people who are firing on Ruth because of her statements regarding the bigmouth racist with the little hands…..I say RightFrigginOnJusticeRuth!  Right Friggin On!….. …actually….It’s not a good sign that so few people are screaming…..

Donald Trump is claiming that he didn’t invite Sarah Palin to the Republican convention because Alaska is too far away from Cleveland, Ohio.
The Washington Examiner reported:

This may come as a newsflash to Trump, but Alaska is in the United States of America, and they have airports.

The Republican Party is erasing Sarah Palin, much in the same way that they have erased both Bush presidencies. When Republicans talk about the White House, they act like George W. Bush’s two terms in office never happened.

“What does it say when even Fox News gives her the boot?”

Ego met ineptitude as Sarah Palin hilariously thought that she could out fox Fox News, and manage the spin behind her firing.

Howard Kurtz has the details, “The new contract offered by Fox, say people familiar with the situation, would have provided only a fraction of the million-dollar-a-year salary. It was then, they say, that Palin turned it down and both sides agreed to call it quits. A friendly announcement was planned for Friday, but a source close to Palin leaked the news in the afternoon to Real Clear Politics, saying the former Alaska governor “decided not to renew the arrangement” and ‘remains focused on broadening her message of common-sense conservatism.’”

Nothing says thanks for paying me three million dollars like trying to stab your former employer in the back on the way out the door. What makes Palin’s attempt to spin her firing hilarious is the fact that she somehow thought that she could out fox Fox News. She actually believed that she could control the perception of her firing by telling Real Clear Politics about it first.

Sarah Palin actually believes that she is bigger than Fox News.

By offering Palin a contract that would pay her what she is actually worth instead of what she thinks she is worth, Fox News was able to push her into leaving the network. This isn’t the first time that her ego and greed have cost her a job. There was no second season of her reality show, Sarah Palin’s Alaska, because Palin wanted to be paid millions of dollars per episode to continue the series.

While the Republican Party has moved on to dreaming about Paul Ryan, Chris Christie, and Marco Rubio, Sarah Palin is still stuck in 2008. She still thinks that she is a superstar worthy of top dollar. Fox News execs realized that they had made a bad investment with Palin, and knew that the one sure way to get rid of her was to slash her salary.

It has always been about the money for Sarah Palin. For years, Palin refused to speak at CPAC because they wouldn’t pay her. With her star on the decline, and in desperate need of an ego boost, she finally went slumming in front of conservative activists in 2012.

Sarah Palin left the national stage in the same arrogant, deluded, and greedy way that she came in. Palin knows that her departure from Fox News was a stealth firing. That’s why she tried to get out ahead of the story. It will be easier to con her few remaining fans into giving her money if they believe that she left the cable news ratings leader because she has bigger fish to fry.

The absolutely idiocy of thinking that she could out propagandize one of the biggest propaganda machines in the world pretty much sums of the worldview of Sarah Palin. Sister Sarah views herself as bigger than Fox News, and bigger than the conservative movement. She is a superstar in her own mind, but she can’t see that the world has passed her by.

Sarah Palin is the 21st Century Norma Desmond. She is stuck in the past and dreaming of comeback that will never happen.

Mr. Ailes, Sarah is ready for her close-up.

…..meanwhile back at the ranch…….the trump campaign Heath Kit continues to be built by…..

…who the hell…..knows?…….but…Manafort’s hemorrhoids gotta be killing him!…..