Face the Nation’s John Dickerson is a huge campaign history nerd. Here’s how he sees Trump.
We might think of elections past as sepia-toned and staid, but American politics has been wild and raucous from the beginning.

John Dickerson, a political columnist at Slate and the host of CBS’s Face the Nation, makes that point over and over again in his podcast, Whistlestop, which explores turning points and famous moments from past presidential campaigns. In his new book, Whistlestop: My Favorite Stories from Presidential Campaign History, Dickerson draws out the themes that recur in American campaign history — how candidates collapse, how they beat expectations, and how they tap into deep feelings within the electorate.

I spoke with Dickerson about how this exploration of the past informs his thinking about today. Much of the point of his podcast is that the present often echoes the past — there’s nothing new under the sun, even in modern-seeming disputes like that over HIllary Clinton’s email. (The election of 1884 featured its own war over personal correspondence.)

But he argued that, while the past can be a clue to what might happen in the present, it also tells us when we should be surprised. And even given his historical perspective, he finds parts of Trump’s campaign legitimately unprecedented.

We talked about whether Donald Trump, Andrew Jackson and George Wallace compare, how the 2016 campaign is different from what’s come before, and how reporting on the past has changed how he thinks about the present.

A transcript of our conversation, edited and rearranged for length and clarity, is below.

Libby Nelson: I’m a huge fan of Whistlestop — I listened to about eight episodes driving to Cleveland for the Republican National Convention and back. I’m curious how you got interested in campaign history and why you think it’s important to explore.

John Dickerson: When you look at the past, it gives you clues about what might happen in the future, and you have a road map for what to look for. And when it doesn’t happen that way, you know what’s changed that’s interesting and therefore worth paying attention to.

It gives you some context of what’s going on and there’s so much that’s context-free that it’s a way to kind of feel a little bit more grounded.

LN: What about this year, and about Trump in particular, is historically unprecedented and what is not?

JD: We’ve seen repeatedly throughout American history that candidates who weren’t taken seriously at first become real forces of the people over time. They were wrong about Wallace in 1968. People thought he was in the race only as kind of a trick effort by Johnson to steal Southern votes from Nixon. So we got it wrong, and we’ve gotten it wrong about Trump in this race, so that’s very similar.

This happened in 1824 with Andrew Jackson. Nobody thought was a serious candidate. They thought he was in the race to help John Quincy Adams by stealing votes from other candidates. One of his friends said, there’s no more chance Andrew Jackson is interested in the presidency than that I am. So they were wrong about that.

The appeal of a non-establishment outsider is similar. Jackson was a war hero in 1824, and Donald Trump is not, but the public notoriety of Jackson is similar. He was a reality star, which is to say he participated in reality and it made him a star.

The conversation about falling in love with a military hero and that leading to demagoguery was similar. The notion that the solution to everything could be found in a single person was directly at odds with the way the country was founded. And so in 1824 when that was the pitch of the Jackson campaign — here’s a guy with ties to the revolutionary era, with ties to the virtue of that era, who can restore America — it was seen as a horrendous argument that anyone would suggest that a single person could solve the country’s problems.

When Donald Trump says “I can fix it,” he’s making a similar pitch.

And the craziness of the campaign is similar. Campaigns have been pretty mellow for the last 100 years, but when they first started out in 1840, rallies were eight-hour drunken affairs.

LN: So is there anything different about Donald Trump, or have we seen it all before?

JD: What’s different, of course, is you have a person who’s elevated themselves through their celebrity status, and who’s manipulated the media — I don’t mean manipulated in the sense of gotten the media to do his bidding, but has successfully used the existing channels of media to build a candidacy for himself — and who has played to the angers and frustrations of the electorate in the modern age in a way that’s different than Wallace and more successful.

LN: How valid are the comparisons to the Wallace campaign? I remember you did an episode on this, but he’s brought up frequently as someone who was similar to Trump in many respects.

Donald Trump is playing those same notes. Which isn’t to suggest that everyone who has a fear about law and order has a race-based fear. The messiness is figuring out, just because the first person on the bus is a white nationalist, doesn’t mean the person eight rows away on the bus shares any of that person’s views. There’s a lot of economic anxiety tied up on this that makes people like the idea of Trump because they think the economy isn’t going very well.

JD: There’s an economic piece to the support for Trump that might have nothing to do with race. Particularly with the first African-American president, it’s very hard to tease out what is about race and what isn’t, and what’s about race that Donald Trump doesn’t even have to overtly appeal to.

So the question political scientists John Sides and Lynn Vavereck pose is how much of that is race. And if you look at the map of the voting that took place in the South for John Kerry in ‘04 versus Barack Obama in ‘08, you see a much lower percentage of the vote among whites for Obama in the South than for John Kerry. Those are the latent ways in which race is a part of this race.

So it’s not to say that the racism that Wallace is playing on doesn’t exist today, it’s just a little bit less overt.

JD: You have people calling out Donald Trump for making racist comments — Paul Ryan, of course, the Speaker of the House doing that, and you didn’t have that in 1968 when Wallace was out there. You didn’t have lots of people calling him out in part because Nixon didn’t want to alienate his voters in the South.

The big difference of course was that Wallace was a guy who had come from a modest lifestyle in the South, which was considered after the Civil War as being certainly not as cosmopolitan as New York City. And Donald Trump is a tribune of the working class, or pitches himself as that, even though he’s a child of privilege of New York City. It’s a very different messenger than in the Wallace case.

LN: How has immersing yourself in campaign history changed how you think about campaign reporting?

JD: It keeps context in the forefront. We’ve all been learning this in the internet age, which is the old-fashioned he said/she said approach to reporting doesn’t work anymore. It worked a little better when each side had a code that they followed and therefore you were matching roughly equivalent claims.

LN: Wait, what? What campaign was that?

JD: I think it’s one of his first races — 1948 or something. I think it’s an apocryphal story, but that story was told in the old days as a massive outlier.

In this campaign you have a lot more where simply repeating both sides of an argument does more work for one side. In the old days, a candidate would be penalized for making outrageous claims or being too coarse. There was a self-stabilization. and that doesn’t exist anymore.

LN: Is there one thing from the history of campaigns you think more people should know about?

JD: Our tolerance for the normal bumps and bruises that happen in political debate conversation, we’ve lost. We have no tolerance for what’s natural in politics, which is debate and disagreement and conflict. And so every time there’s the tiniest little conflict, everyone reacts to it like a plane crash, and that’s goofy. What happens is then everybody clams up, and real differences are kind of elided or papered over because nobody wants to look like their campaign is on the wrong track or out of control. It’s such a shame, because it means nothing gets discussed out loud. It gets sublimated.

The immigration debate taking place within the Republican Party right now — various Republican leaders have tried to keep a lid on that. And they’ve kept a lid on it, and they’ve been too afraid to have the fight in public because they don’t want to hurt themselves in an election, or they don’t want to look like they’re in disarray. So they do nothing about immigration, it festers and festers, and it gives rise in part to the Trump candidacy.

LN: When did that acceptance for debate and discussion start to dissolve?

JD: At least in the presidential context, when political conventions were actual fights, when candidates got to the convention and didn’t have the nomination locked up, there were debates about who the nominee should be.

They’d fight, they’d fight, somebody would win, and that person would have to call for unity. The call for unity, because they’d just had the fights 10 seconds before — they didn’t paper it over. They said, “OK, we fought like hell, we had our disagreements, we agree on more than we disagree. Off to tomorrow.” They would acknowledge the fact that they’ve had this fight, and they’d move on.

Now what happens ins the fight happens in the primaries, and the conventions are four days of public relations and show, which are not real. It’s all commercial.

The conventions are a big part to blame. The rise of the presidency on television is a major part of what’s to blame. I think the rise of the internet and social media actually takes back some of the original earthiness of politics. The problem is it takes back too much of it, because people can behave like dogs and they don’t get penalized for it.

LN: In the Whistlestop podcast, you often pick out a single moment or important event from a campaign as a way to talk about the broader political context. What moment from 2016 would you use if you were looking back on this from 2040?

But I think Donald Trump’s reaction to the Khan family — either as a breaking point, which is to say this is when his impulsiveness became just too much for Republicans and/or the electorate, and you just couldn’t come back from that, because it went to his underlying biggest weakness, which is whether he’s fit for the presidency.

Or it’s the moment that everything broke, and they changed the campaign, and they got a new campaign manager, and Trump realized that in order to win he had to start doing some of the compulsory things you’re supposed to do. And if that’s the case then it was a turning point for the successful pivot.

We just don’t know yet, but I think that’s probably the biggest moment. 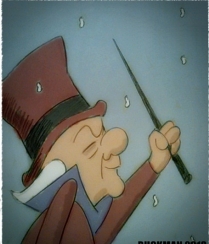