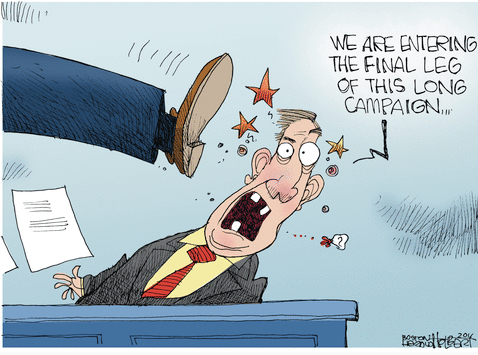 There is much work that lies ahead, and she is ready and prepared to do it.

I’ve been thinking lately about Shirley Chisholm’s legacy and her words: “Freedom is an endless horizon, and there are many roads that lead to it.” As Chisholm understood, we engage in imperfect systems sometimes, to make them more perfect. And our engagement in democracy comes in many forms — we engage in democracy in protests, in board meetings, in classrooms and, importantly, at the ballot.

I am not naive enough to believe that voting is the only way to bring about transformational change, just as I know that protest alone is not the sole solution to the challenges we face.

But elections do have consequences.

The next president will continue to shape the trajectory of justice and landscape of opportunity in this country. She will be responsible for how trillions of dollars in federal funding are spent, decide how to ensure both liberty and security in an increasingly interconnected world and determine the path forward on health care and Social Security.

I am voting for Hillary Clinton.

Make no mistake, I do not agree with Clinton on everything. For that matter, there are few people in the world with whom I agree on everything.

Her platform should call for an end to the death penalty. It should end the federal government’s “Equitable Sharing Program,” which helps police take cash and property from people who are never convicted of wrongdoing. And when I met with her last week, I asked her to address not only how the federal government should treat nonviolent drug offenders but also the many others whose lives have been impacted by the system of mass incarceration.

But I agree with Clinton more than I disagree with her.

When Clinton started this campaign, she didn’t appear to understand the urgency of the need to address racism. When I first met with her in October 2015, she had not yet released comprehensive policy positions dealing with racial justice. She seemed slow to grasp why it was important to act with comprehensive proposed solutions.

The unrest and activism over the last two years has undoubtedly pushed Clinton, specifically on key issues that she and other Democrats otherwise would not have addressed as forcefully as the party’s platform does: private prisons, an increased minimum wage, the role of institutional and implicit bias in sustaining unjust systems and acknowledging the need to address racism directly, to name a few.

Clinton’s platform on racial justice is strong: It is informed by the policy failings of the past and is a vision for where we need to go.

It acknowledges the need to establish new restrictions on police use of force and militarization, invest in treatment and rehabilitation as alternatives to police and prisons, and protect and expand the right to vote.

It also explicitly calls for undoing some of the key components of the 1994 crime bill that Bill Clinton signed into law, such as mandatory minimums, the “three strikes” laws and the remaining 18-to-1 disparity in sentences between crack and powder cocaine.

Perhaps most impressively, she calls for a $125 billion Economic Revitalization Initiative that is akin to a new New Deal, structurally investing in youth employment, re-entry, small business growth and homeownership.

Her platform signals both deep understanding of the challenges and a plan to move us forward. When I met with her last week, it was clear that she now understands these issues well at a policy level and that she has researched the implications of the positions that she has proposed. In this meeting, she spoke both about the context of change and the concrete actions necessary to open new pathways of equity and justice.

Politics is compromise, by its very nature. But we never compromise on our values and beliefs. I will vote for Clinton and plan to continue to challenge her on her platform and these commitments when she’s in the White House.

I often hear some of my peers say that they may not vote, that a Donald Trump presidency would bring about a productive apocalypse — that the system would grind to a halt and force us to confront everything that is wrong with the system. But we know that the system will not come to a grinding halt; it never has. In a Trump administration, the system would surely grind us, black and brown folks, even more than it already does.

When Trump says, “Make America great again,” he is referencing an era when people were singled out and harmed because of their race and religious beliefs, and when violent enforcement of Jim Crow masqueraded as the will of the people.

Trump’s campaign strategy is simple voter suppression: His base already hates Clinton — he is only attacking her to dissuade black and brown people, moderates, undecideds and liberals from voting altogether.

And so Trump is the first major-party candidate in recent memory who campaigns expressly on moving backward from today. It’s the only way he wins.

Clinton has the plan to move American forward. I believe in moving forward.

The false distance of history deceives some into believing that the trauma of racism and injustice is in our past. Trump is placing a bet that America can be fooled into thinking its greatness lies behind it — that restricting immigration and the rights of religious minorities and ending social welfare programs are things to be celebrated, as they have been in the worst moments of our history.

There is much work that lies ahead, and Clinton is ready and prepared to do the hard work. And we can, and will, hold her accountable every step of the way.