Skip to content
Straight Arrow Do the right thing, Education, Forest Through The Trees, Get a grip, Home, Plastic Pollution Coalition February 21, 2017 4 Minutes

8 bits of plastic you can quit right now

The Earth can’t digest plastic. Plastic things are bought and used and that’s it – the Earth is burdened further. This issue has reached critical point. And we have to act. All of us. Because we are the issue. I know some of us get flummoxed by the data.

Earth can’t digest plastic. Once it exists, it’s never going to be gone. Every bit of plastic that’s ever been made still exists on the planet. As time goes by plastic will separate into smaller and smaller pieces, but never completely biodegrades. And so….

Plastic in the ocean now outnumbers sea life six to one.
All (yes, all) sea turtle species have been documented with plastic in or around their bodies.
One million sea birds are killed annually from plastic in our oceans.
Plastic chemicals, like BPA, are absorbed by the body. They disrupt hormones and your endocrine system. I’ve written on this before. It’s a big issue. Especially if you have autoimmune disease.
Aside from the BPA issue, which most people are aware of, plastic also contains DDT and PCB — two extremely toxic chemicals. The health effects of DDT include cancer, male infertility, miscarriages and low birth weight, developmental delay, nervous system and liver damage. PCBs also contribute to cancer and cause disorders of the immune, reproductive, nervous and endocrine systems.
So. Eight plastic habits to Change. Now.

1. Plastic cutlery. Totally wrong. It kills me that often health food shops with eco ethos’ are the worst for not supplying reusable stuff. This ain’t fringe thinking any more. France has just banned plastic cutlery, cups and plates. (So you know, 150 single-use cups are thrown away every second in France.) They’re aiming to cut landfill waste in half by 2025 and reduce greenhouse emissions 40 per cent by 2030.

Do this: Carry a splade in your purse/bag* (a spoon, fork and blade in one). Or a “spork” – spoon and fork combo – one at each end – available from reChusable.com.
2. Straws. Don’t use one! 90 per cent of the debris found on Sydney beaches is plastic water bottles and straws. These pieces can get so tiny that they are then ingested by marine life. Bigger marine life comes along and gobbles up the prey that has just swallowed a chunk of plastic, and so it makes its way up the food chain.

Do this: Sip your drink, only use if there are biodegradable ones available at your cafe or invest in a stainless steel reusable one. And leave in your bag*. 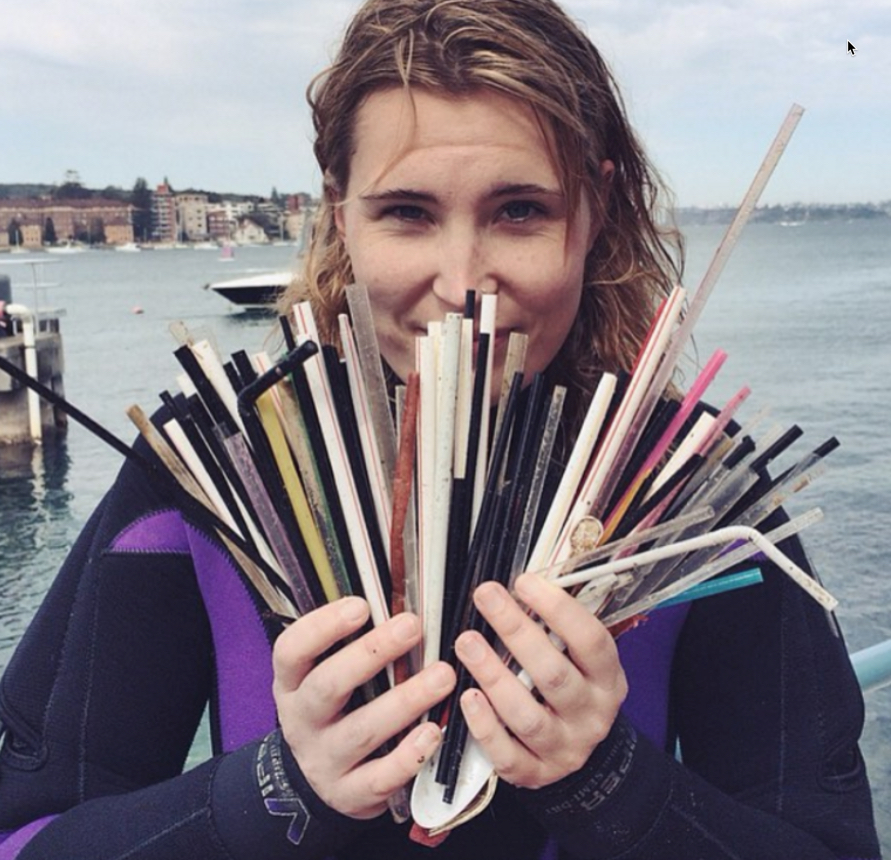 This stack of straws gathered during a 20-minute snorkel off Manly, Australia
3. Bottled water. In the US, 1500 plastic water bottles are consumed every second. Every SECOND. The plastic contains BPA and phthalates, both of which have a huge negative impact on our bodies. They also take 25 per cent of their volume in oil to make each bottle. That’s a lot of fossil fuels.

Do this: Drink from a tap. Invest in a Soda Stream. Take a reusable bottle with you in your bag* and fill up at public water fountains, at cafes or at work.

In Australia, takeaway coffee cups are the second biggest contributor to waste after plastic bottles. That’s because we use approximately 1 billion disposable coffee cups a year.

Do this: Use a JOCO Cup instead. We use these at our IQS office. And you can…keep one in your bag*.

5. Plastic toothbrushes. Yep, your plastic toothbrush needs to go. Most toothbrushes are made with nylon bristles, a metal staple to hold the bristles in place and the plastic handle. All need to be separated before being “processed” for recycling. And no, the plastic is not recyclable. (It’s a softer plastic, so these are usually turned into other products…but the plastic never goes away…)

Do this: Use a bamboo toothbrush.

Do this: Keep reusable bags in your car. I keep an I Quit Sugar shopping bag (softened from much use) rolled up at the bottom of my main, daily bag.

7. Take away containers. Although not in circulation at the level of plastic water bottles, plastic food containers need to go, too. They contain chemicals that affect our bodies, and they also all end up in landfill. (And the ocean.)

Do this: cover dishes with a plate (stop using plastic wrap, too!). Use, and re-use, your Ziplock bags.

Do this: Buy toilet paper that’s wrapped in paper. Preferably buy recycled. We do. Our office uses Who Gives a Crap. They tick all the right boxes and they donate a percentage of their profits to charity.

*If you find yourself thinking it’s ridiculous of me to suggest you carry such things in your bag, think about the fact you might already carry a water bottle already anyway, you’re fine to carry your phone, a spare jumper, etc. …

It’s really just about getting over yourself and adjusting.