………….I couldn’t pick Dennis Bailey out of a two Bailey line up…….but I’m liking his stuff more every day……. 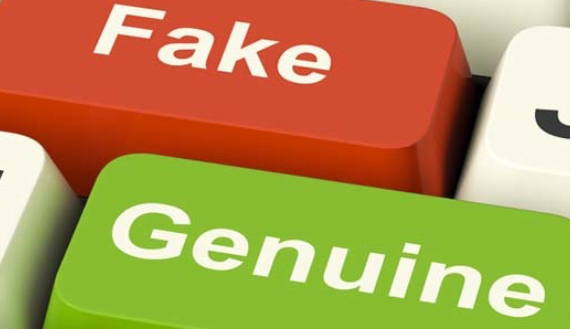 Quick quiz: Which story is false?

They’re all false. Every one of them. There are no facts or evidence to back up any of these claims. They’re not even debatable. They are all indisputably false.

And yet every one of them (except number three) was the subject of a tweet or repeated statements by the President of the United States. Think about that. Millions of people heard or read about the president of the United States saying these words as if they were true. And his disinformation was repeated throughout the conservative media echo chamber – Fox and Friends, Hannity, Rush Limbaugh, InfoWars, etc.  Even more people saw and shared them on social media sites like Facebook, Reddit. Twitter and 4chan.

They’re all fake, but I can almost guarantee that Trump supporters will be emailing me shortly to passionately defend most of them. And they’ll likely call me an idiot and asshole for good measure. These are the same people who claim there is something “very fishy” about the death of former Clinton advisor Vince Foster (even Trump believes it), suggesting that he was murdered, maybe by the Clintons themselves, to keep him from talking.

In fact, there’s nothing fishy about it at all. It was suicide, and five official investigations have confirmed it.

Now these same people have moved on to Seth Rich, a staffer at the Democratic National Committee who was murdered in Washington, DC last year in what the police say was a botched robbery attempt. That doesn’t stop the right-wing conspiracy mob from weaving a fantasy that Rich was again murdered by the Clintons or someone in the Democratic Party because he leaked those famous DNC emails to WikiLeaks or the Russians.

No he didn’t, and there’s not a single shred of evidence to suggest otherwise. But try telling that to the true believers on the right who eagerly swallow these outlandish, evidence-free claims like a bag of M&Ms. For the right, they have become articles of faith – immutable and incontrovertible. And if you don’t believe them, you’re just part of the swamp, the “deep state,” a Clinton apologist, or worse a “libtard.”

I used to believe, naively, that all one had to do to convince a fake news believer to change his tune was to show him the facts, the contrary evidence from a respected news source. Nope. The purveyors of fake news don’t really care if they’re not true, or don’t want to know. All they know is the stories conform to what they believe, and they’ll keep posting and retweeting them even after they’ve been proven false. Besides, to a trafficker in fake news, there are no “respected news sources” in the mainstream media, only Breitbart, Fox News or Drudge, or even shadier sites like DailyWire, The Gateway Punditand Truth Feed News.

The fake news generated by these sites and others has so infected the national dialogue that we can no longer have intelligent, meaningful debates about important issues because the various sides can’t agree on basic facts. The venomous distrust of our once honored institutions – government, law enforcement, politicians, corporations, the news media – along with hyper-partisanship have combined to create a malignancy that has eroded faith in the very foundations of America itself. Make America Great Again? How is that possible if so many of its citizens believe it’s corrupt to its core, that all the elected leaders on one side lie, that its most respected news organizations are mere propaganda tools and aren’t telling the truth?

With the recent revelation of thousands of bogus accounts on Facebook by Russian operatives working to upset the 2016 election, the fake news phenomenon threatens more than just our national discourse and legitimate journalism. It’s a threat to democracy itself. The evidence may soon show that without Russian interference, Donald Trump would not be president, and that’s a scary thought. A foreign adversary may have been a decisive factor in installing its choice for “leader of the free world.”

And with Trump’s enthusiastic embrace of some of the most outlandish fake news conspiracy stories – and his total disregard and utter contempt for the entire Russian interference plot – we are moving deeper down the rabbit hole toward an Orwellian, authoritarian United States that only a few years ago would have been considered unthinkable.

How did we get here?

First let’s define “fake news.” The term has become so frequently used by Trump and his fans to blast any story they don’t like that it has lost all meaning. Fake news isn’t news articles that contain errors. Reporters often make errors, always have, and they usually correct them. Bad journalism is bad journalism. It isn’t fake news.

“Fake news” means articles on websites and other channels that have the look and feel of traditional news, but are deliberately fake or untrue. They are advocacy pieces, designed to persuade, incite or turn viewers and readers for or against a person or cause. They don’t serve the public interest, as good journalism does, they serve a narrow interest of the author (or in many cases their financial backers). Often thinly sourced or not sourced at all, the stories are highly clickable, shareable, and often end up going viral. Think “Pizzagate,” a fake news story about a supposed child-sex ring operated by Clinton and her aides out of the basement of a pizza parlor in Washington, DC. Evidence for this was supposedly contained in coded messages in the DNC emails that were leaked to WikiLeaks.

Crazy, you say? Who could possibly believe such nonsense, right? But after the story bounced around the Internet for months (including a retweet from Michael Flynn, Jr., the son of Trump’s national security advisor), one poll found that 46% of Trump supporters believed it. Forty. Six. Percent. Never mind that the basement below the pizza parlor where these child-slaves were confined doesn’t even exist. Almost half of Trump’s voters believed it because they wanted to believe it.

It’s called “confirmation bias,” and we’re all guilty of it: searching, interpreting, favoring or recalling information in a way that confirms one’s preexisting beliefs or hypothesis. If you believe that Hillary Clinton is the human manifestation of Beeizebub, the web is a beautiful thing because articles or blog posts that support are is just a click away.

Truth, on the other hand, is harder to find. It means setting aside your bias, considering opposing views, and fairly evaluating evidence and the people or institutions offering it. Who does that anymore? Most people like and share news articles on Facebook without even reading past the headlines. 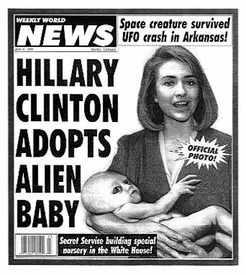 Fake news is nothing new. Remember those supermarket tabloids with screaming headlines about Bigfoot and Bat-boy? That alien baby story in the quiz was an actual cover story of the old Weekly World News. As crazy as those stories were, there was an audience that believed them, just as today they believe in nutty stories like Pizzagate. I remember working one night at a newspaper when I got a call from a very irate reader asking why we didn’t have the results of the latest professional wrestling match on the sports pages. My attempt to explain that Chief Jay Strongbow was really just an entertainer not an athlete didn’t go well.

People aren’t any more gullible than they were then. What’s different today is the extreme cultural and political divide that has widened in this country in just the past several years, coupled with the way most of us get our news – from what we used to call the World Wide Web, that enormous digital stew of data, news and information that is both a blessing and a curse. Everything you want to know, and a lot you don’t, is literally at your fingertips. But there is almost no way to tell if what you’re reading is from a legitimate news organization or from some pasty-faced techno-nerd living in his mother’s basement. Or maybe it’s from a Russian agent.

Not surprisingly, a disproportionate number of tweets about Pizzagate originated in the Czech Republic and other countries, and some of the most frequent retweeters were bots – automated software applications that can spread tweets and Facebook posts at higher rates than are humanly possible. Research has shown that in the last few months of the 2016 presidential campaign, fake news stories like Pizzagate that were overwhelmingly negative toward Hillary Clinton were shared far more often than stories from the New York Times, CNN or any other legitimate news source.

That’s the danger of fake news. It has overwhelmed us.

Russia is years ahead of us in understanding how accepting people can be of fake news on the web, and how it can be weaponized. We were sitting ducks, too arrogant to believe that we would ever fall for the kind of Cold War propaganda methods the Soviet Union employed on its own people for decades. No, we are much too intelligent, worldly and literate to fall for state-sponsored disinformation campaigns aimed at manipulating the news and controlling its citizens. Or so we thought.

Russia didn’t believe it either. As Patryk Babiracki, an associate professor of history at the University of Texas at Arlington, recently wrote, “The Soviet government never dreamed that millions of patriotic Americans would read — and believe — Pravda. But as Russian-generated stories zip around the Internet and through conservative media circles, propaganda is proving to be an effective tool to undermine the values and cohesion of the West.”

Remember: 48% of Trump voters believed Hillary Clinton was operating a sex-slave ring out of the basement of a pizza parlor. Russia is winning. And we have a president who doesn’t understand the threat, doesn’t believe it or doesn’t care, and won’t lift a finger to do anything about it.

By Dennis Bailey – The Savvy Blog