GLENDIVE, Mont. — Fishing here conjures images of waders and featherweight flies landing softly on lazy rivers, an irresistible lure for the one- or two-pound trout swimming beneath.

Catching a giant paddlefish weighing 50 or 100 pounds is an altogether different pursuit. And in an unusual twist, the end result is a bounty of an unusual delicacy: roe sold around the country as caviar.

“It winds up on cruise ships, it winds up in restaurants, it winds up everywhere,” said Dennis Scarnecchia, a professor of fisheries at the University of Idaho.

He supervises paddlefish caviar programs in Montana, North Dakota and Oklahoma, the proceeds of which are funneled into research and monitoring of these freshwater leviathans. He considers the programs “a model for sustainable recreational fishing.”

The highly regulated season for snagging paddlefish on the Yellowstone River, near the North Dakota border, opened on May 15, some 15 miles from this small town.

Dozens of fishers, sitting in lawn chairs and standing in waders, crowded the tree-lined bank below Intake Diversion Dam, which provides water for irrigation.

It’s a festive affair, with signs greeting paddlefish enthusiasts who come from all around the country. They park trailers and tents beneath the brilliant green canopy of newly leafed trees, and the smell of campfire smoke hangs in the air.

The river is extraordinarily high and muddy this year, the color of chocolate milk. The fish are trying to spawn upstream but can’t get past the dam, so they stack up in large numbers below it.

Instead of flies, these fishers tie a large treble hook on the end of a heavy line on a large rod, the kind used for used for saltwater fishing. Below that they tie a quarter-pound of lead, or sometimes a sparkplug or piece of chain from a chain saw, to pull the hook down in the rapidly flowing water.

Then they spend a long day casting the heavy rig as far out into the river as possible, rapidly reeling the line back in, giving it an occasional jerk in hopes of setting the hooks in the flanks of a paddlefish. When they do, they pull it in.

Last year, 273 paddlefish were caught on opening day. This year just 39 fish were taken on the first day because of the high-water conditions. The largest was 89 pounds.

As of Friday, the number of paddlefish caught was 275; the biggest so far weighed 99 pounds. The river flow had swelled even more, to 56,000 cubic feet per second.

When a fish is hooked, a cry goes up: “Fish on!” People look to see who has a deeply bent rod. It can take five or ten minutes of intense, high-tension reeling to bring in the heavy fish.

Once it slides onto the gravelly bank, the hooks are removed.

“It was a fight,” said an excited 15-year-old, Matthew Klima of Belgrade, Mont., who cradled a 46-pound fish he had just caught.

Paddlefish are one-of-a-kind, in the same family as sturgeon. They are silvery gray with tiny eyes, extremely large gills and a toothless mouth.

They are filter feeders with large comb-like “gill-rakers” in their gaping mouths that filter zooplankton, their main food, from the water.

Their signature feature is the unusual flat paddle, or rostrum, that extends from the snout and can be half as long as the fish. I

t’s part of a unique, highly sensitive electro-sensing system that, in concert with tens of thousands of tiny sensors on its head, functions like sonar to detect zooplankton.

Sharks and platypus have similar systems for locating food.

It’s an adaptation to the murky, sediment-choked water of the muddy rivers paddlefish thrive in. The rostrum is so sensitive that researchers say it can detect the movement of a single microscopic creature.

Occasionally a fish is found without a paddle, usually cut off by prop strikes from boats.

Paddlefish, like sharks, are constantly moving or holding steady in rapid currents to keep water flowing through their large open mouths, from which they capture oxygen and food. 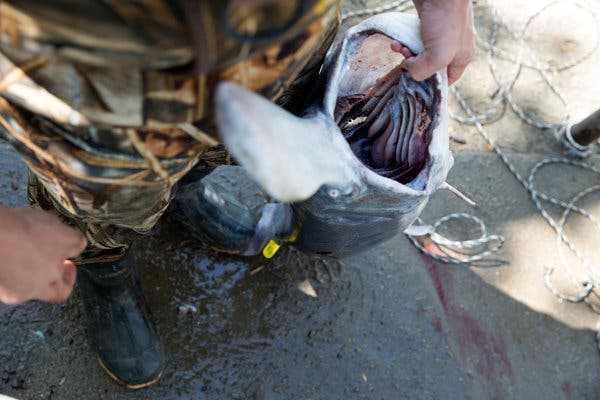 The gaping mouth of a paddlefish. Its gills are used to filter zooplankton.

While a big trout in Montana might weigh four or five pounds, the record paddlefish caught in this state in 1973 weighed 142.5 pounds.

The paddlefish lineage in Montana goes back some 70 million years or more, and the species has been around for 200 million years.

The paddlefish season runs here until June 30 but may end earlier if the 1,000-fish quota is reached. Last year, it was over in five days.

An archery season opens in July: People hunt the fish with lights from boats at night.

Today, the catch are weighed and measured. Dr. Scarnecchia waves a detector over each paddle to see if the fish has an implanted wire, placed by researchers earlier in its life.

Then he snips a piece of jawbone and counts the layers like tree rings to determine the age of the fish — something he has done with every paddlefish caught in the caviar programs in the three states.

His collection of jawbones go back to 1990, an unusually rich trove of scientific data.

Fish that he tagged many years ago as juveniles are often caught these days at this event. “You see these fish grow up, just like your kids,” he said.

The giant fish are laid on a conveyor, still flopping, and ushered into a “cutting trailer” where they are quickly sliced into fillets.

The roe, a dark gray egg mass, is scooped into bowls. A female can carry as much as 30 pounds of eggs. About two-thirds is the finished weight.

The eggs are screened and washed by workers in rubber aprons and gloves in a separate “egg trailer,” the eggshells and fat discarded.

The fillets are bagged and given to the fishers along with a paddlefish recipe book.

After they are soaked in brine, the eggs are quickly frozen to be sold as caviar.

“You have to get them into the brine as fast as possible or they’ll break,” said Kayla Allen, one of the egg washers.

“Cooking the fillets are like grilling pork chops,” said Bryan Arp, of Cheyenne, Wyo., as he was casting his treble hooks along the shore. “I slice them and marinate them in butter, salt and lemon.”

The fishers donate the paddlefish roe to the Yellowstone Caviar Program, run by the Glendive Chamber of Commerce. Last year the nonprofit program produced 1,300 pounds, and in 2016, 2,000 pounds. Wholesale, the price varies from $60 to $200 a pound.

Prices have been depressed, said Christine Whitlatch, director of the chamber of commerce, because of large amounts of farm-raised caviar coming from China.

After expenses, 30 percent of the proceeds goes to fund research and monitoring efforts by the Montana Department of Fish, Wildlife and Parks.

The rest goes to the Caviar Grant Program, which donates to a variety of nonprofits in 15 rural counties for purposes ranging from playground construction to building preservation.

The program has handed out almost $1 million since its inception in 1990.

Wild paddlefish are found in 22 states. The species have declined across the United States and virtually disappeared in the only other country in which they were found, China. A chief threat to the dinosaurlike fish is dams.

Dams prevent a river from spilling over its banks and scooping up organic material — food for zooplankton, the fish’s prey. And dams have wiped out nursery and spawning areas.

Before dams were built, paddlefish were highly migratory, often swimming hundreds of miles upstream to spawn. They once flourished throughout the Mississippi and Missouri river drainages. These are still their strongholds, but they are now greatly reduced in numbers.

Dr. Scarnecchia credits proceeds from the caviar programsfor maintaining consistent monitoring of the species that has helped keep populations from falling further.

Paddlefish caviar has taken a larger role in fine dining because of the decline of beluga sturgeon in Russia and in other countries of the former Soviet Union. In the United States, paddlefish are also a target for poachers, especially in Tennessee and Missouri.

While this town is the undisputed capital of Montana caviar, you can’t find the salty, fishy delicacy on the menus of any restaurants in this town of about 5,000.

“This is beef country,” Ms. Whitlatch said. “Caviar has never been part of the regular food culture. But we’re trying to change that.”

One thought on “……Hooking the Dinosaur of Fish…..”