Mr. Trump, in an all-caps message on Twitter addressed to President Hassan Rouhani of Iran, wrote that the country would face “CONSEQUENCES THE LIKES OF WHICH FEW THROUGHOUT HISTORY HAVE EVER SUFFERED” if he continued to threaten the United States.

To Iranian President Rouhani: NEVER, EVER THREATEN THE UNITED STATES AGAIN OR YOU WILL SUFFER CONSEQUENCES THE LIKES OF WHICH FEW THROUGHOUT HISTORY HAVE EVER SUFFERED BEFORE. WE ARE NO LONGER A COUNTRY THAT WILL STAND FOR YOUR DEMENTED WORDS OF VIOLENCE & DEATH. BE CAUTIOUS!

Mr. Trump’s message was apparently in response to a speech Sunday by Mr. Rouhani, who said that any conflict with Iran would be the “mother of all wars.”

Mr. Rouhani had earlier threatened the possible disruption of regional oil shipments if its own exports were blocked by United States sanctions. 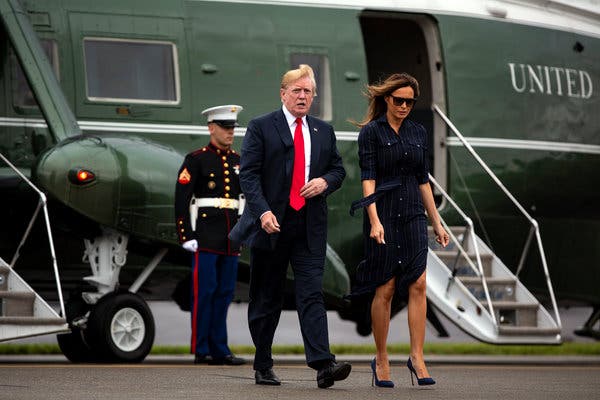 On Saturday, Iran’s supreme leader, Ayatollah Ali Khamenei, said he supported Mr. Rouhani’s suggestion, an indication that Iran’s leadership was in accord over the apparent threat. Mr. Rouhani has long been considered a more pragmatic leader who was seen as tolerable to moderates.

Mr. Trump announced in May that the United States was withdrawing from the 2015 Iran nuclear deal, and last month the United States said it would impose sanctions on all exporters of Iranian oil. American officials have since moderated the sanctions demand, which roiled oil markets.

Mr. Trump’s warning to Iran came hours after a speech by Secretary of State Mike Pompeo that was harshly critical of Iran’s leadership. Mr. Pompeo accused Iran’s leadership of widespread corruption at the expense of its citizens’ welfare.

“Governments around the world worry that confronting the Islamic Republic harms the cause of moderates, but these so-called moderates within the regime are still violent Islamic revolutionaries with an anti-America, anti-West agenda,”

Mr. Pompeo said in the speech at the Ronald Reagan Presidential Library in Simi Valley, Calif. “You only have to take their own words for it.”

Mr. Trump’s tough talk with Iran comes as he faces criticism over his meeting last week with President Vladimir V. Putin of Russia and vacillating statements over whether he believes Russia interfered in the 2016 election.

This week Paul Manafort, Mr. Trump’s former campaign manager, is scheduled to face trial in Alexandria, Va., on charges of financial improprieties, the first of two criminal trials he faces.

The trial will be the first prosecuted by the special counsel, Robert Mueller, who is investigating Russia’s interference in the presidential election.

One thought on “..Trump Threatens Iran on Twitter, Warning of Dire ‘Consequences’…”