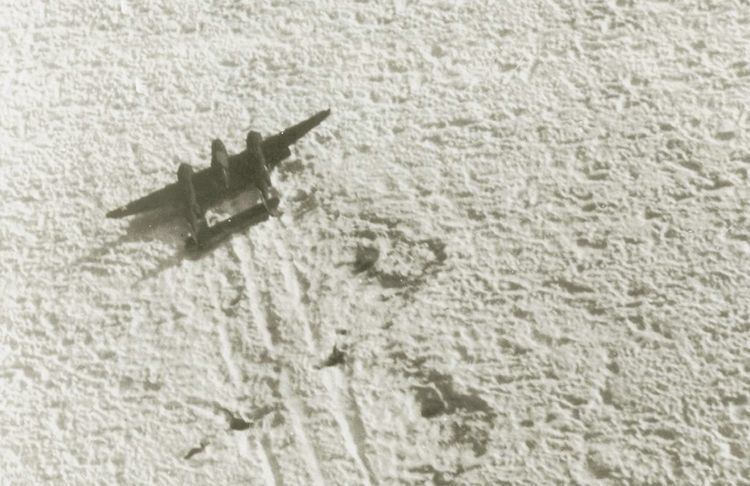 On July 15, 1942, six P-38 Lightning fighter aircraft and two B-17 Flying Fortress bombers encountered a blizzard while supporting the Allied war effort in the British Isles.

The aircraft were forced to conduct an emergency landing on the glaciers of Greenland, and though all the crew members were rescued nine days later, the aircraft were left behind.

Over the decades, the ever-shifting ice sheets of Greenland buried the aircraft, known as the Lost Squadron, under between 250 and 300 feet of ice.

Fifty years later, in 1992, one of the P-38s was extracted from the ice and restored to flying condition: the infamous Glacier Girl.

Now, a revitalized search effort led by the non-profit Arctic Hot Point Solutions has discovered another P-38 of the Lost Squadron.

Hints of the aircraft were first detected in 2011 as the team combed the area with radar to search for objects under the ice.

Once the P-38 was detected, the search team used a heat probe driven by a hot pressure washer system to tunnel through the ice in an attempt to touch the aircraft and confirm that it was indeed a plane, rather than “a large rock, or a woolly mammoth,” according to a recovery team update sent to Popular Mechanics.

When the heat probe came up, the team was pleasantly surprised to find it covered in 5606 hydraulic fluid—a surefire sign that the object was one of the missing P-38s.

“We pulled the probe back up, and lo and behold it had all that hydraulic fuel all over it.”

Initially the team didn’t know what the thick red substance was, but the group of pilots and aviation enthusiasts didn’t need long to discover that it was 5606, a common hydraulic fluid in aircraft.

“We pulled it up, and boy it was pretty dense, all over the place—our jackets, on the floor, all over our hands, and it was quite a surprise,” Salazar says.

The aircraft has been identified as the P-38 “Echo” piloted by Robert Wilson on that fateful day in 1942.

The search team, with support from the governments of Greenland, the United States, and the United Kingdom, plans to return next summer to begin the extraction process of the P-38.

Like during the recovery of Glacier Girl, the team will use large heat plates to tunnel down to the aircraft, then send workers down to clear out a cavern around the plane with blasts of hot water. The P-38 will be disassembled and sent up piece by piece.

The find is an exciting piece of history to say the least, but the search doesn’t end with the P-38 “Echo.”

There are still six undiscovered aircraft that are part of the Lost Squadron, and many additional WWII aircraft went down over this same patch of Greenland as they flew between the United States and the European theater.

Just 20 miles or so from the Lost Squadron site, at Koge Bay in Greenland, the team continues to search for their primary target: a Coast Guard Grumman J2F Duck that is believed to still have the remains of three airmen inside.

“It is the biggest MIA search in modern history,” Salazar says.