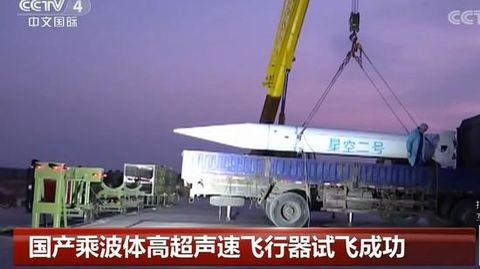 Beijing hopes hypersonic weapons will help it leap to parity with the U.S. military.

The Chinese government tested a new hypersonic weapon system last week, one designed to fly at speeds in excess of Mach 5.

The China Aerospace Aerodynamics Research Institute announced on its WeChat account that it conducted the first domestic test of a “wave rider” hypersonic vehicle at 6:41 a.m., August 3, 2018.

According to Beijing’s state media, the rocket flew for ten minutes.

The People’s Liberation Army news site describes the wave rider weapon as one that “uses the aerodynamic shape of the fuselage to generate lift, with a lift-to-drag ratio between 0.5 and 1.3. … it is mainly used for spacecraft design to re-enter the atmosphere.

The wave body is used in a wide range of speeds, and has a high structural strength, maneuverability and lift-to-drag ratio at Mach 5.23.

From the appearance, the wave body looks flat.”

Starry Night 2 appears to be a so-called “boost glide” weapon.

Boost glide weapons hitch a ride on a rocket to high altitudes, but unlike ballistic missiles, they fall short of sending their payloads all the way to low Earth orbit.

The weapon then glides down to the target at thousands of miles an hour.

The advantage of boost glide weapons is that they confound current missile defenses.

Boost glide weapons fly to their targets at a trajectory that is too low for ballistic missile defense systems and too high for traditional air defense missiles.

A boost glide weapon could hypothetically deliver a nuclear weapon against America’s Ground Based Midcourse Defense ballistic missile interceptors in Alaska, clearing the way for a wave of ballistic missiles to follow.

That said, China has a strict no first use policy with regards to nuclear weapons.

A Chinese boost glide weapon would more likely carry a conventional payload to strike a target like an enemy headquarters or aircraft carrier.

China is moving rapidly to develop new “leap ahead” military technology, especially weapons that the U.S. has no established defense against such as railguns and hypersonic weapons.

If China can erode the U.S. lead in bleeding edge tech, it may not have to spend enormous sums on other, outdated weapons.

……………seems like just another  version of the fuzz buster game……but good to know that China has a strict “no first strike” policy…………and of course we have the Manchurian Cantaloupe who once  pondered out loud.