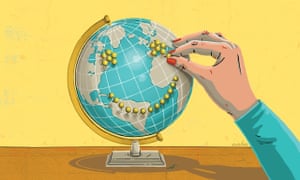 Optimism is more necessary than ever, and understanding how other cultures approach life’s trials and joys may help us achieve contentment.

If you read the paper or look at the news online without becoming depressed about the state of humanity – or make it through your social media feeds before your mood lurches to despair – well done you. You are a beautiful anomaly.

For everyone else: huddle in.

It’s tough out there and it can be easy to get the idea that the world is getting more miserable by the minute, that we’re all becoming more isolationist and that these are bleak times indeed.

Because when things are ticking along nicely, there’s very little to report.

Negativity bias means that, as human beings, we experience “bad” events more intensely than we do the “good” – and we also remember them more.

So we have to work hard to remain hopeful – or we can’t make things better.

If we feel hopeless all the time, if we’re always in crisis, the natural response is to give up and stop trying altogether.

But we can’t let snark or apathy win.

We can be aware of the bad whilst being mindful of how we can make it better.

And there are people all around the world finding meaning and happiness every day, both in countries that top the global happiness surveys and in those that don’t.

Since I started researching what constitutes happiness in different countries, I’ve been inspired by testimonies about the unique cultural concepts that constitute “a good life”.

Of course, definitions of “happiness” vary and metrics to measure contentment also differ.

Thailand, for example, has been ranked the least miserable country out of 66 economies for the fourth year running in Bloomberg’sMisery Index.

The UN World Happiness Report for 2018 put the Nordic nations in the top four slots as usual, based on healthy life expectancy, social support, freedom, trust and generosity.

But there’s also Australia, number 10 on the list, where a laidback attitude and a passionate belief in a “fair go” for all, helps turn strangers into friends – with 94% of Australians saying they know someone they could rely on in times of need.

Or understated Switzerland, number five on the list, where not even the Swiss can bear to boast about why they have it so good (spoiler alert: wealth, watches and the winning ethos of Roger Federer may have something to do with it).

Canada, America’s more socially liberal neighbour, has ranked among the happiest nations since the report was first published in 2012, thanks to a generous helping of joie de vivre – especially in Quebec, the French-speaking province.

Quebeckers are so happy that were Quebec a nation, it would be second only to Denmark in international rankings

When tasked with explaining why, Quebeckers proffer something along the lines of: “It’s because we’re French, but you know, not France French.” What other nation would describe an orgasm as “a little death”?.

Canadians also have a good welfare state and an outdoorsy lifestyle, but what sets them apart from similar cultures is an emphasis on inclusiveness.

Multiculturalism is regularly cited as one of Canada’s biggest achievements and the ability to celebrate difference is a distinguishing feature.

The Canadian mindset has been heavily influenced by First Nation ideas of equality and instead of crushing aboriginal values, Canada embraced them.

Canadians cottoned on to the idea that we’re all richer from a plurality of voices – and that opening up your social circle to welcome in new people and celebrate diversity is a pretty good life plan.

There’s also a wealth of ideas from countries that don’t feature on any official lists.

Brazil, the country of carnival, football and nuts, has a word for the absence of happiness: saudade, used to describe the feeling of longing for happiness that once was.

The term was popularised in the 15th century when Portuguese ships sailed to Africa and Asia and those left behind felt the loss of loved ones.

The Portuguese colonised Brazil in the 16th century and the word was taken up by settlers to remember the homeland they’d left behind – a concept now so celebrated in Brazil that it has its own day, on 30 January each year.

Researchers from the University of New South Wales have found that accepting and allowing for temporary sadness in this way helps improve attention to detail, increases perseverance, promotes generosity and makes us appreciate what we’ve got.

Saudade teaches us that a degree of melancholy in life is inevitable – desirable, even – and something to be savoured rather than ignored.

No one can be carnival-happy all the time and the lows help us appreciate the highs.

The Thai concept of mai pen rai, or “it doesn’t matter, don’t worry”, reminds us to maintain perspective.

Hyperbole is so widespread in today’s society – especially on social media – that if we don’t “love” something it’s assumed we must “hate” it.

There are myriad shades of grey that we’d all do well to acknowledge before galloping to outrage.

A mai pen rai approach dictates that instead of striving all the time for more, the way we live life now is good enough and that “walking the middle ground” is the route to happiness, a theory upheld by researchers from the Greater Good Science Center at the University of California, Berkeley.

Rest is important, too.

Dolce far niente – or the sweetness of doing nothing – is a much treasured concept in Italy that’s seldom spoken out loud but is often hashtagged on Instagram, accompanying pictures of Italians in hammocks.

Italy doesn’t top any happiness rankings, but the cliché of the carefree Italian exists with good reason.

Italians do “nothing” like no other nation and perfecting the art takes style and skill.

It’s watching the world go by over coffee and gelato.

It’s laughing at tourists. Or politicians.

It’s savouring the moment and really enjoying the present.

In Turkey, keyif – or the pursuit of idle pleasure – keeps locals sane and sanguine in turbulent times.

Inactivity feels like an act of transgression for many in Europe where the Protestant work ethic is alive and well and held up as a goal for all.

And yet when we make time to rest, we have the energy and the reserves to partake in civic debate/wash the car/deal with a tax return.

Another wellspring for a happy life worldwide is resilience – proven to increase immunity and reduce stress.

The unofficial motto for Icelanders and wannabe Vikings everywhere – Þetta reddast – roughly translates as “it will be all right” and has come to represent the unwavering belief that everything will work out in the end.

Since Icelanders have made their home in such an inhospitable landscape, it’s a belief that helps them score highly on happiness polls even in sub-zero temperatures.

In India, meanwhile, jugaad – meaning frugal innovation, a “hack”, or an attitude and commitment to getting things done, no matter how – has long helped Indians make the best of what they’ve got in hugely challenging circumstances.

Some of the themes that emerged while researching my book were universal – such as time with family and friends, having a hobby, taking the pressure off at work, or engaging with nature – but others were more profound.

The Bantu term ubuntu means “I find my worth in you and you find your worth in me”, a sense of interconnection and the belief in a bond or sharing that connects all humanity.

Bantu is spoken in Central Africa, Southern Africa and the African Great Lakes region, but ubuntu has been claimed by South Africa as a humanitarian objective to live by.

In the 1990s, it became a guiding light for the anti-apartheid movement and even appears in South Africa’s Interim Constitution.

Nelson Mandela led with ubuntu and it drove archbishop Desmond Tutu’s work as chairman of the South African Truth and Reconciliation Commission.

Ubuntuurges us to care more, asserting that to be happy, we have to make sure others are, too.

Even the people we don’t know.

Even when it hurts.

As Tutu said: “I am sorry to say that suffering is not optional.”

So forget Descartes’ “I think therefore I am,” it’s time for a new philosophical bumper sticker: “I am because you are.”

Rested and resilient, with our compassion levels restored, we can take action and make things better for everyone.

That way, we’ll all be happier – long term.

The Atlas of Happiness