– followed by another Position To consider 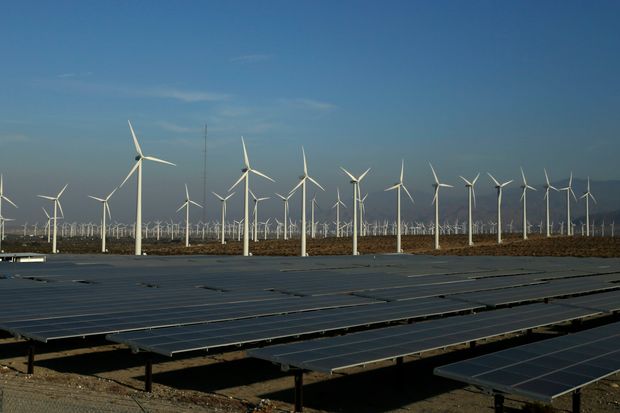 Realizing this dream would require the biggest expansion in mining the world has seen and would produce huge quantities of waste.

“Renewable energy” is a misnomer.

Wind and solar machines and batteries are built from nonrenewable materials.

And they wear out.

Old equipment must be decommissioned, generating millions of tons of waste.

than double the tonnage of all today’s global plastic waste.

Consider some other sobering numbers:

Fabricating one requires digging up, moving and processing more than 500,000 pounds of raw materials somewhere on the planet.

Use gasoline and extract one-tenth as much total tonnage to deliver the same number of vehicle-miles over the battery’s seven-year life.

When electricity comes from wind or solar machines, every unit of energy produced, or mile traveled, requires far more materials and land than fossil fuels.

That physical reality is literally visible: A wind or solar farm stretching to the horizon can be replaced by a handful of gas-fired turbines,

each no bigger than a tractor-trailer.

Building one wind turbine requires 900 tons of steel, 2,500 tons of concrete and 45 tons of nonrecyclable plastic.

Solar power requires even more cement, steel and glass—not to mention other metals.

Global silver and indium mining will jump 250% and 1,200% respectively over the next couple of decades to provide the materials necessary to build the number of

World demand for rare-earth elements—which aren’t rare but are rarely mined in America—will rise 300% to 1,000% by 2050 to meet the Paris green goals.

If electric vehicles replace conventional cars, demand for cobalt and lithium, will rise more than 20-fold. That doesn’t count batteries to back up wind and solar grids.

“Exponential growth in [global] renewable energy production capacity is not possible with present-day technologies and annual metal production,” it concluded.

The demand for minerals likely won’t be met by mines in Europe or the U.S.

Instead, much of the mining will take place in nations with oppressive labor practices.

The Democratic Republic of the Congo produces 70% of the world’s raw cobalt, and China controls 90% of cobalt refining.

[that] have maintained high biodiversity because they haven’t yet been disturbed.”

What’s more, mining and fabrication require the consumption of hydrocarbons.

Building enough wind turbines to supply half the world’s electricity would require nearly two billion tons of coal to produce the concrete and steel,

along with two billion barrels of oil to make the composite blades.

More than 90% of the world’s solar panels are built in Asia on coal-heavy electric grids.

Engineers joke about discovering “unobtanium,” a magical energy-producing element that appears out of nowhere, requires no land,

weighs nothing, and emits nothing.

Mr. Mills is a senior fellow at the Manhattan Institute and a partner in Cottonwood Venture Partners, an energy-tech venture fund, and author of the recent report, “The ‘New Energy Economy’: An Exercise in Magical Thinking.” Appeared in the August 6, 2019, print edition.

……  join the conversation with accurate real facts …. as many and possible …. upon which we can make responsible living decisions……

…Next a look at The Benefits of Renewable Energy Use.

Benefits of Renewable Energy Use

Wind turbines and solar panels are an increasingly common sight.

What are the benefits of renewable energies—and how do they improve our health, environment, and economy?

This post explores the many positive impacts of clean energy, including the benefits of wind, solar, geothermal, hydroelectric, and biomass.

For more information on their negative impacts—including effective solutions to avoid, minimize, or mitigate—

see our page on The Environmental Impacts of Renewable Energy Technologies.

Human activity is overloading our atmosphere with carbon dioxide and other global warming emissions.

The result is a web of significant and harmful impacts, from stronger, more frequent storms, to drought, sea level rise, and extinction.

In the United States, about 29 percent of global warming emissions come from our electricity sector.

Most of those emissions come from fossil fuels like coal and natural gas.

Carbon dioxide (CO2) is the most prevalent greenhouse gas, but other air pollutants—such as methane—also cause global warming.

In contrast, most renewable energy sources produce little to no global warming emissions.

Even when including “life cycle” emissions of clean energy (ie, the emissions from each stage of a technology’s life—manufacturing, installation, operation,

The comparison becomes clear when you look at the numbers.

Burning natural gas for electricity releases between 0.6 and 2 pounds of carbon dioxide equivalent per kilowatt-hour (CO2E/kWh);

whether or not it is sustainably sourced and harvested.

Different sources of energy produce different amounts of heat-trapping gases. As shown in this chart, renewable energies tend to have much lower emissions than other sources, such as natural gas or coal.

Increasing the supply of renewable energy would allow us to replace carbon-intensive energy sources and significantly reduce US global warming emissions.

In addition, a ground-breaking study by the US Department of Energy’s National Renewable Energy Laboratory (NREL) explored the feasibility of generating 80 percent of the country’s electricity from renewable sources by 2050.

They found that renewable energy could help reduce the electricity sector’s emissions by approximately 81 percent [5].

and a host of other serious problems.

The pollution affects everyone: one Harvard University study estimated the life cycle costs and public health effects of coal to be

an estimated $74.6 billion every year.

That’s equivalent to 4.36 cents per kilowatt-hour of electricity produced—about one-third of the average electricity rate for a typical US home [6].

Most of these negative health impacts come from air and water pollution that clean energy technologies simply don’t produce.

Geothermal and biomass  systems emit some air pollutants, though total air emissions are generally much lower than those of coal-

In addition, wind and solar energy require essentially no water to operate and thus do not pollute water resources or strain supplies by competing with agriculture,

In contrast, fossil fuels can have a significant impact on water resources: both coal mining and natural gas drilling can pollute sources of drinking water,

and all thermal power plants, including those powered by coal, gas, and oil, withdraw and consume water for cooling.

Hydroelectric power plants can disrupt river ecosystems both upstream and downstream from the dam.

found that total water consumption and withdrawal would decrease significantly in a future with high renewables [7].

Strong winds, sunny skies, abundant plant matter, heat from the earth, and fast-moving water can each provide a vast and constantly replenished supply of energy.    A relatively small fraction of US electricity currently comes from these sources, but that could change: studies have repeatedly shown that renewable energy can provide a significant share of future electricity needs, even after accounting for potential constraints [9].

Jobs and other economic benefits

This means that, on average, more jobs are created for each unit of electricity generated from renewable sources than from fossil fuels.

Renewable energy already supports thousands of jobs in the United States. In 2016, the wind energy industry directly employed over 100,000 full-time-equivalent employees in a variety of capacities, including manufacturing, project development, construction and turbine installation, operations and maintenance, transportation and logistics, and financial, legal, and consulting services [10]. More than 500 factories in the United States manufacture parts for wind turbines, and wind power project installations in 2016 alone represented $13.0 billion in investments [11].

Increased support for renewable energy could create even more jobs. The 2009 Union of Concerned Scientists study of a 25-percent-by-2025 renewable energy standard found that such a policy would create more than three times as many jobs (more than 200,000) as producing an equivalent amount of electricity from fossil fuels [15].

Local governments also benefit from clean energy, most often in the form of property and income taxes and other payments from renewable energy project owners. Owners of the land on which wind projects are built often receive lease payments ranging from $3,000 to $6,000 per megawatt of installed capacity, as well as payments for power line easements and road rights-of-way. They may also earn royalties based on the project’s annual revenues. Farmers and rural landowners can generate new sources of supplemental income by producing feedstocks for biomass power facilities.

Renewable energy is providing affordable electricity across the country right now, and can help stabilize energy prices in the future.

Although renewable facilities require upfront investments to build, they can then operate at very low cost (for most clean energy technologies, the “fuel” is free). As a result, renewable energy prices can be very stable over time.

Moreover, the costs of renewable energy technologies have declined steadily, and are projected to drop even more. For example, the average price to install solar dropped more than 70 percent between 2010 and 2017 [20]. The cost of generating electricity from wind dropped 66 percent between 2009 and 2016 [21]. Costs will likely decline even further as markets mature and companies increasingly take advantage of economies of scale.

In contrast, fossil fuel prices can vary dramatically and are prone to substantial price swings. For example, there was a rapid increase in US coal prices due to rising global demand before 2008, then a rapid fall after 2008 when global demands declined [23]. Likewise, natural gas prices have fluctuated greatly since 2000 [25].

Wind and solar are less prone to large-scale failure because they are distributed and modular. Distributed systems are spread out over a large geographical area, so a severe weather event in one location will not cut off power to an entire region. Modular systems are composed of numerous individual wind turbines or solar arrays. Even if some of the equipment in the system is damaged, the rest can typically continue to operate.

Water scarcity is another risk for non-renewable power plants. Coal, nuclear, and many natural gas plants depend on having sufficient water for cooling, which means that severe droughts and heat waves can put electricity generation at risk. Wind and solar photovoltaic systems do not require water to generate electricity and can operate reliably in conditions that may otherwise require closing a fossil fuel-powered plant. (For more information, see How it Works: Water for Electricity.)

The risk of disruptive events will also increase in the future as droughts, heat waves, more intense storms, and increasingly severe wildfires become more frequent due to global warming—increasing the need for resilient, clean technologies.

[2] Energy Information Agency (EIA). 2017. How much of the U.S. carbon dioxide emissions are associated with electricity generation?

[18] Deyette, J., and B. Freese. 2010. Burning coal, burning cash: Ranking the states that import the most coal. Cambridge, MA: Union of Concerned Scientists.

[23] UCS. 2011. A Risky Proposition: The financial hazards of new investments in coal plants.

….   a bit into the weeds for some perhaps  …….but sooner or later this … WILL BE DEALT WITH ……… on a personal level by every living person on this planet. …