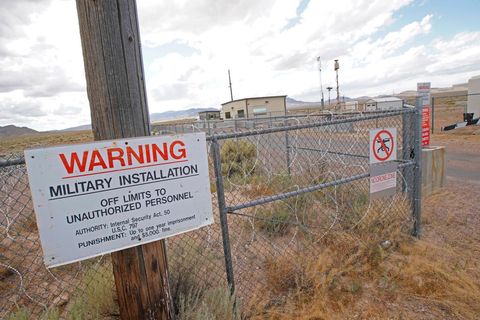 Today’s the day that has long been promised, when a bunch of people are heading to the Nevada desert to see them aliens and possibly get arrested in pursuit of

When we last checked in on Storm Area 51, a.k.a. “Alienstock,” which started as a Facebook joke to send hundreds of thousands of people to the military testing site

and quickly spiraled out of control, its organizer pulled the plug on the ill-advised raid in favor of a less-logistically-nightmarish music festival in Las Vegas, 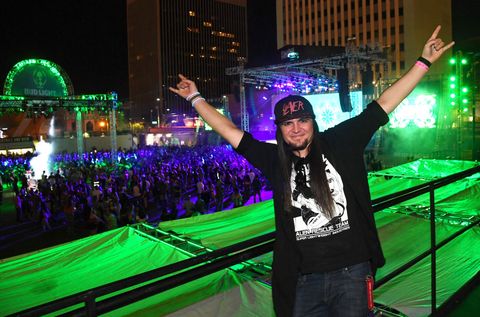 Matty Roberts, creator of the original “Storm Area 51” Facebook event, instead threw the Area 51 Celebration at the Downtown Vegas Events Center on September 19.

But that hasn’t stopped UFO enthusiasts and trolls from invading rural Nevada today to take part in unsanctioned alien festivities,

and the government has all its ducks in a row: Earlier this week, the Federal Aviation Administration announced it would be shutting down airspace above Area 51

through the weekend for “special security reasons.”

Area 51, of course, is a genuine classified defense site and is protected as such, with a sign that reads, “Restricted Area: It is unlawful to enter this area without

permission of the Installation Commander.” Cross that line and you’re committing an offense against Section 1382 of Title 18: entering a military installation without

That’s just one reason, among many others, why storming Area 51 is a pretty terrible idea.

On September 10, a Dutch YouTuber and his friend were arrestedthree miles deep into the Nevada National Security Site and jailed

—and that was several days before today’s proceedings.

We can only imagine the kind of trouble still to come.

So that’s why we’ll be updating this page throughout the day, as official reports, tweets, photos, and videos trickle in from the Area 51 raid.

Keep checking back here to see what’s happening out in the desert, from arrests to rallies to, Lord willing, the intrepid trespassers actually uncovering UFOs and ETs. 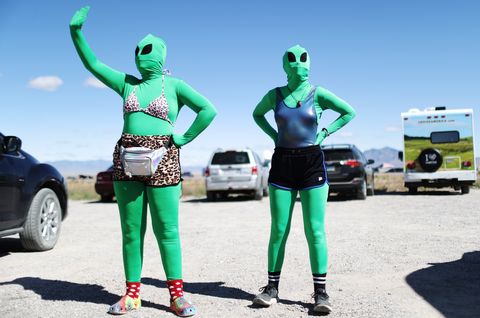 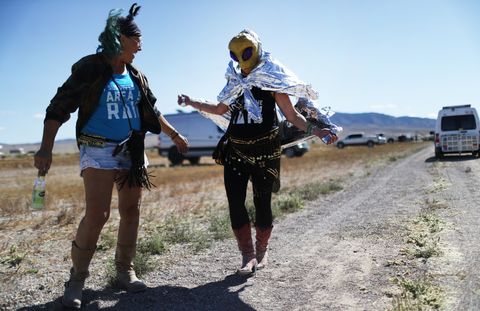 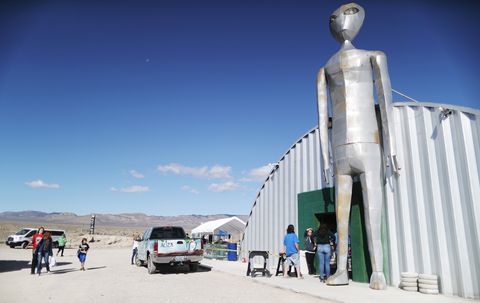 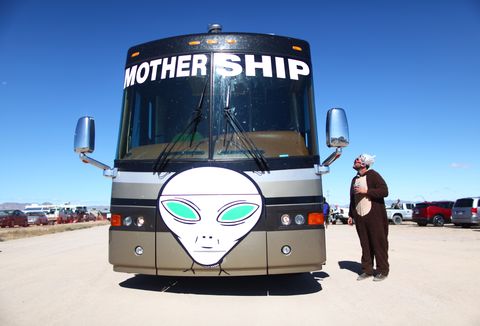 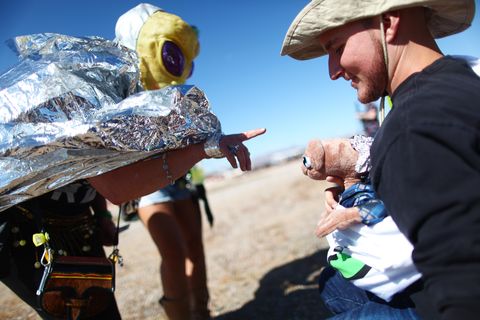 The first is Alienstock, which original Facebook ringleader Matty Roberts pulled out of in favor of last night’s Bud Light-sponsored event in Vegas,

leaving many rural Nevada residents, who had already sunk resources into the festival, in the lurch.

Among the jilted was Connie West, owner of the Little A’Le’Inn in tiny Rachel, Nevada, who plunked down a $17,500 down payment for security to host Alienstock and

—and most of the images and videos you’re seeing today come from Alienstock.

So far, so good. Reporter Mick Akers of the R-J is on the scene at Alienstock today, snapping photos of the alien enthusiasts.

The crowd at Alienstock, Akers says, has grown considerably in size since this morning’s first dispatch.

The Coneheads showed up:

Later tonight, another alien-themed festival, Area 51 Basecamp, will set up shop in Hiko, around 30 miles from Rachel.

and performances from DJs like Paul Oakenfold, who will hit the stage tonight.

The event’s tagline? “Get abducted at your own risk.”

And it’s not even for a cool reason.

Did the guy who was arrested this morning try to uncover the classified wreckage of flying saucers?

Instead, cops busted him for urinating near Area 51’s gate, per the AP.

Meanwhile, another woman was detained for an undisclosed reason, though we hope it was something more badass.

Step up your game, guys.

Elsewhere at the raid, this is happening:

TheAssociated Press reports that about 75 people showed up at the Area 51 gate Friday morning, and at least two were detained by local police.

And while the numbers aren’t anywhere near the more than 2 million people who jokingly RSVP’d to the original Facebook event,

with 150 traveling deeper into the area to “get within selfie distance” of the gates.

Meanwhile, we have our first Naruto run!

“If we Naruto run, we can move faster than their bullets,” the Storm Area 51 Facebook event promised.

The Naruto Run is named after a manga character who runs at superhuman speed with his arms stretched out behind him.

This has spawned a host of internet memes with people imitating Naruto’s running style in unlikely situations.

More Photos from the Storm 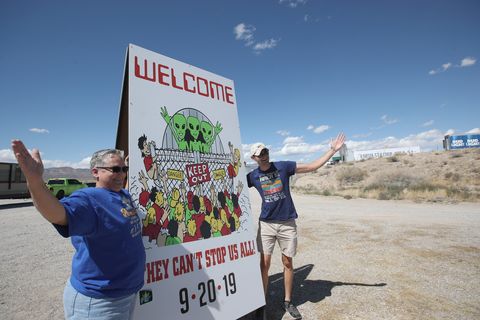 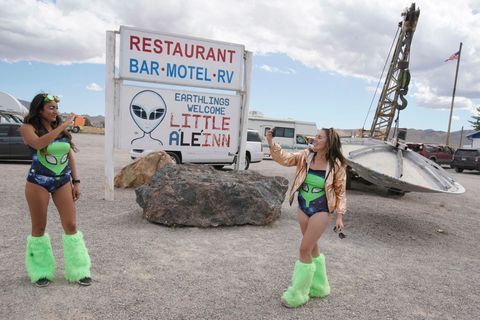 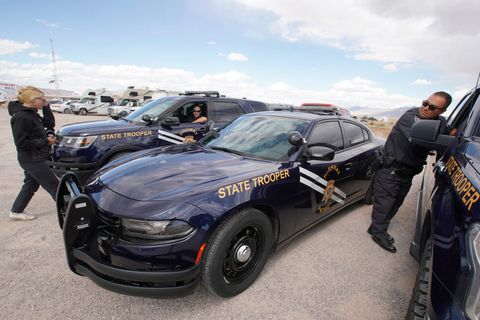 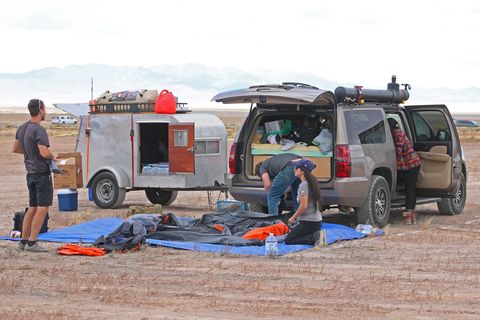 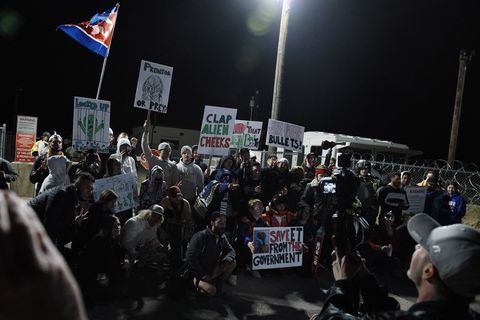 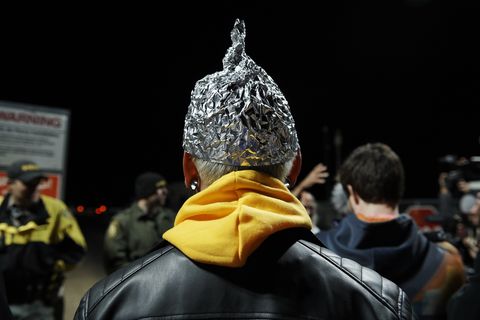 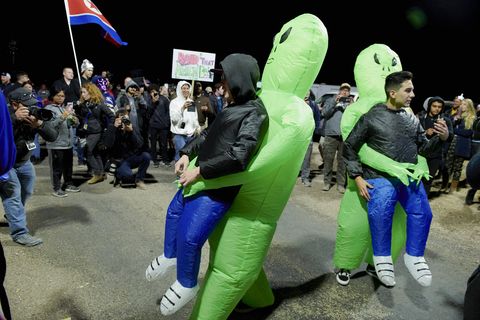 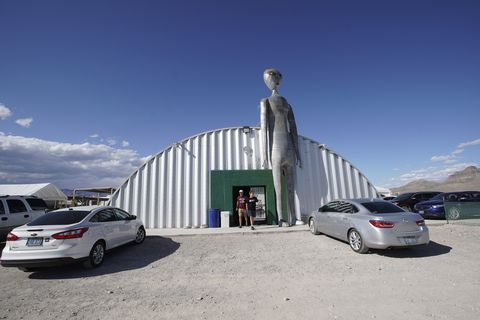