President Trump boasts of defeating the Islamic State. He’s only showing how ignorant he is. 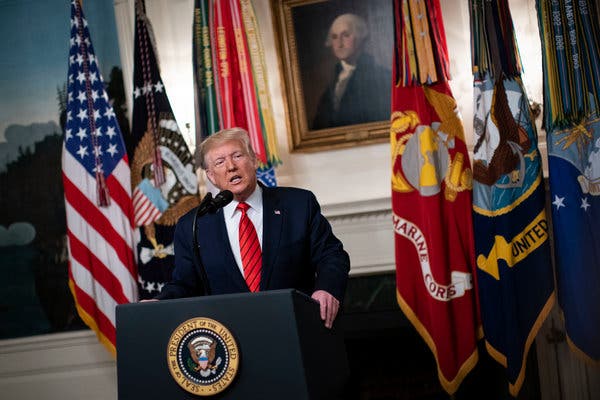 Islamist movement to emerge in the Middle East in the modern era.

The world is certainly a better place with Abu Bakr al-Baghdadi dead and a measure of justice meted out on behalf of all the women ISIS raped,

all the journalists ISIS beheaded and the tens of thousands of Syrians and Iraqis it abused.

Good for President Trump for ordering it, for the intelligence agents who set it up, for the allies who aided in it and for the Special Forces who executed it.

But this story is far from over, and it could have many unexpected implications.

President Trump was effusive in his praise for the U.S. intelligence agencies who found and tracked al-Baghdadi to the lair in Syria where he blew himself up

to avoid being captured.

In his news conference, Trump went on and on about just how good the men and women in our intelligence agencies are.

Well, Mr. President, those are the same intelligence agencies who told you that Russia intervened in our last election in an effort to tip the vote to you and against

Clinton (and are still intervening).

When our intel agencies exposed that reality, you impugned their integrity and quality.

— who complained that you, Mr. Trump, abused the power of your office to get Ukraine to investigate Joe Biden, touching off this impeachment inquiry.

And those same intelligence agencies whom you hailed as heroes for tracking down al-Baghdadi, Mr. Trump, are the same “deep state,” the same agencies and

So thank you, Mr. Trump, for clearing up this confusion.

are the same heroes who have stepped up to protect our constitutional democracy from within.

Unlike you, Mr. Trump, they took seriously their oath to do both.

As for the future of the Middle East, let’s not forget that ISIS was the Sunni Muslim jihadist organization that emerged after President Barack Obama’s

But al-Baghdadi’s death — a very good thing in and of itself — is not the end of our troubles in and from the Middle East.

to end all peace — only shows how ignorant he is about the region.

ISIS emerged in 2014 as the product of three loose factions or movements, as I pointed out in a column back in 2015.

One faction comprised the foreign volunteers.

Some were hardened jihadists, but many were losers, misfits, adventure seekers and young men who had never held power, a job or a girl’s hand and they joined

ISIS to get all three.

ISIS offered a paycheck, power and sexual release to men and women coming from closed societies or cultures where none of that was available.

Iraqi Sunnis constitute about a third of Iraq’s population.

They had ruled Iraq for generations, and many Sunnis in the Iraqi military were enraged, humiliated and frustrated by how the U.S. invasion of Iraq had overturned

that order and put the Iraqi Shiite majority in charge.

ISIS also derived a lot of passive support from just average Iraqi Sunnis after Iran and pro-Iranian Shiites in power in Baghdad, led by

and keep them from jobs and out of the military.

For many Iraqi Sunni villagers under ISIS control, ISIS was just less bad than the brutality and discrimination they experienced under Iraq’s pro-Iranian

Shiite-led government back then.

Fortunately, we and the Iraqis finally figured that out, and Iraq has a much better government today.

But the U.S. keeps repeating the same mistake in the Middle East: overestimating the power of religious ideology and under appreciating the impact

As Sarah Chayes, who long worked in Afghanistan and has written an important book — “Thieves of State: Why Corruption Threatens Global Security” — puts it:

“Nothing feeds extremism more than the in-your-face corruption and injustice” that some of America’s closest Middle East allies administer daily to their people.

The third ISIS faction was composed of the true religious ideologues, led by al-Baghdadi.

They have their own apocalyptic version of Islam.

But it would not have resonated so far and wide were it not for the first two factors listed above.

And that leads us back to Trump and his foreign policy.

Trump has never met a dictator he did not like.

He is blind to the fact that the next al-Baghdadi is being incubated today in some prison in Egypt, where President Abdel Fattah el-Sisi of Egypt, whom Trump once

actually called “my favorite dictator,’’ is not only rounding up violent Jihadists but liberal nonviolent journalists, activists and politicians.

— so they will not have to look for dignity, power, a job or a girl’s hand from extremist groups like ISIS.

And that brings me back to Syria.

Iran, the pro-Iranian Hezbollah militia, the Shiite-Alawite Syrian regime of Bashar Assad and Russia have all collaborated to create a pro-Iranian

Of course they gave Trump a free pass to kill Baghdadi!

His death just makes it that much easier for them to rule Syria without sharing power with the Sunnis.

As long as that’s the case, there will be no stability there.

Finally, Trump kept going on and on in his news conference about how he, in his infinite wisdom, was keeping U.S. troops in Syria to protect the oil fields there

so maybe U.S. oil companies could exploit them.

He even boasted that while he was against the Iraq war, we should have taken over all of Iraq’s oil fields to pay for it.

This is disgusting talk, and again, a prescription for trouble in the future.

If America has any role in the Middle East today, it is not to protect the oil wells, but to protect and enhance what I call the “islands of decency.”

These are places like Iraqi and Syrian Kurdistan, Jordan, the U.A.E., Oman, Lebanon and the frail democracies in Tunisia and Baghdad.

None of these are developed democracies; Oman, Jordan and the U.A.E. are monarchies.

But perfect is not on the menu in the Middle East right now.

And these countries do promote more moderate versions of Islam and religious tolerance, they do empower their women and they do encourage

These are the necessary but not sufficient antidotes to ISIS.

They are worth preserving and enhancing in hopes that they can develop one day into something better for all their peoples.

Just look at the democracy protests in Lebanon.

You can see where the young people want to go.

— and not its wells of decency.