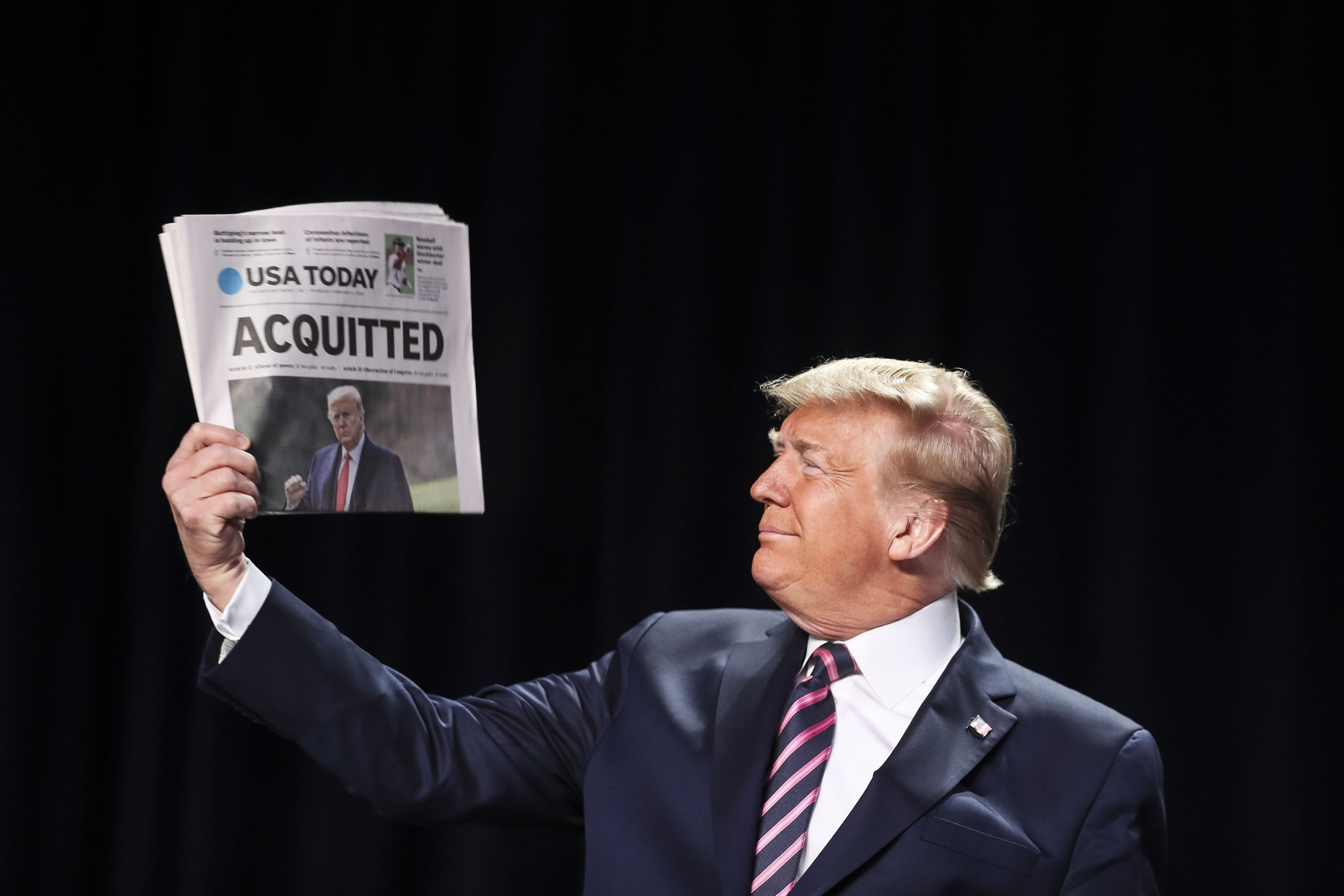 President Donald Trump was acquitted of the charges brought against him in the impeachment trial this week.

The coming months are fateful for our democracy.

1. Impeachment was, despite it all, essential.

The purpose of impeachment was never political.

It was never meant to be undertaken, and never should have been undertaken, with an eye to the Democrats being in a better political position after it was over.

On those grounds it was, as Nancy Pelosi clearly felt, up to the very brink, a gamble not worth taking.

The reasonable argument for why it had to be attempted was that to not impeach Donald Trump was not, well, reasonable.

To allow obvious heedlessness to pass unchallenged was to collaborate in it.

Impeachment was undertaken out of principle—the principle that the rule of law matters, and the corollary principle that political parties are not put in office

And it was, it must always be remembered, undertaken not at the political behest of a few radicals but in response to the collective and appropriate panic

of national-security and intelligence professionals within the executive branch, who blew whistles and gave testimony because they believed that the President’s

behavior was as wrong as wrong could be.

Whether it was politically advantageous or not in the short run, it would have been politically disastrous in the long run to crawl away from such a conflict

begun in such patriotic good faith.

2. Yes, but Trump won, and the consequences are terrifying.

As some people said at the time, the one good thing about an attempted impeachment was that at least the Republican senators,

who all know exactly who and what Trump is, would at last be forced to own their bad consciences.

of his opposition and that of his followers; exactly because they knew how bad he was, they would be compelled to redouble their irrational allegiance.

They could not even look at any evidence, because they knew what it would show.

Bad money always gets thrown in after good, as the gamble becomes ever more desperate.

The trouble is that Trump is now left in firmer control of a party made passive by adherence to him, with his wounded narcissism leaving him

more evidently deranged than before.

His behavior during his post-impeachment appearances might have seemed extreme to Ludwig II of Bavaria, or caused Caligula to raise an eyebrow.

Meanwhile, Attorney General William Barr will protect Trump while allowing the Justice Department to be used as a weapon against his enemies.

Of all the truly frightening moments of the process, the worst might have been the attempt at reassurance by Senator Lamar Alexander, who insisted that,

though Trump might have been mistaken to ask a foreign President to investigate his political rivals, he will now know that the right thing to have done would have been

to ask his Attorney General to start investigations.

—was proposed as more appropriate is a true mark of the defeat of the rule of law.

Nothing now stands between Trump’s id and Trump’s actions.

Trump is an inherently weak President—one with a narrow base of support and zero persuasion skills, and, as of now,

one who is too chaotic to be much good at suppressing dissent.

His acts and their intended consequences are further apart than our fears and his unhinged rages make us believe.

—would anyone have actually been fooled about the origins of those investigations, aside from those among Trump’s followers who live to be fooled by him?

The best efforts of Trump are horribly ugly but ultimately meaningless.

All that has happened is that we are exactly where we were before, but with one side marginally less passive and the other marginally more enraged.

Allowing Trump to have gotten away with his “perfect” phone call would seem to us now far worse as policy,

while having exactly the same effect of creating an ever more unbounded Trump.

A Trump not called to order would be no different than one who has been.

And you know what? Actually, Trump lost.

The idea of a “verdict of history” is an absurdity.

But the verdict of verdicts is not. In this regard, Mitt Romney’s speech was, however impotent judicially, dispositive morally.

Scoffing at the idea that Trump’s behavior was not impeachable, showing that it obviously was, Romney ended all ambiguity and spoke for the truth, and to history.

Certainly, the most permanent moment of the entire impeachment lay in Schiff’s performance before the Senate as the lead House manager.

Often speaking extemporaneously, with a sobriety and a carefully paced intelligence that one might have thought had vanished entirely from the American lectern

, let alone American politics, he was, without exaggeration, Lincoln-like.

Lincoln-like, that is, in a highly specific, formal way: he laid a careful, even tedious foundation of elaborate law and evidence,

and then rose to moral exhortation only on that basis.

It may be too late for anyone to act on this truth, but, if the Democratic Party could vote its conscience and its honor right now, it would surely end,

5. And so will Romney’s courage.

it was largely written by his doppelgänger, Theodore Sorensen, albeit from J.F.K.’s ideas, while the courage of many of Kennedy’s subjects,

especially those who voted to acquit Andrew Johnson in his impeachment trial, now seems less conclusive than it once did.

No matter—the central idea is that democratic politics, though designed to conform legislator to constituency, sometimes demand a legislator who refuses to conform.

This idea, of nonconformity through principle, is essential to the difference between demagogic democracy and liberal democracy,

and Mitt Romney, whatever his flaws and faults, defined it for his time.

(It was made all the more moving by his being inspired by that most echt American of scriptures, the Book of Mormon.)

6. There was a truly shocking collapse of conscience.

The real story was not the complete collapse of conscience among the Senate Republicans.

That was to be expected—after all, the first vote for impeachment ever offered by a senator of the same political party as the President was Romney’s.

before departing it, voluntarily or not.

Clearly filled with contempt for Trump’s manifest unfitness, he refused to speak openly against him,

apparently out of some bizarre mix of distaste for the Democratic Congress and a will to sell books in the fall.

The passivity of the Republicans was to be expected; that of Bolton was not.

Nor was that of other high-ranking former officials, including respected retired generals like James Mattis

—and H. R. McMaster and John F. Kelly, who spoke softly, but not sharply.

Though they weren’t in the White House at the time of the Ukraine phone call, they know the character of the President.

Yet they remained largely silent, seemingly out of a misplaced sense of professionalism and discretion.

(Misplaced because of the unique gravity and urgency of the circumstance.

Though it’s good for soldiers to be discreet, there are moments when their duties as citizens are more important than their habits as officers.)

An overwhelming number of vectors now point toward Trump’s reëlection this year: the state of the economy, the disarray of the Democrats,

and the general truth that incumbent Presidents win.

How the Constitution will survive in the face of a second victory, given the speed with which Trump is demolishing it now, is hard to imagine.

No incumbent President before him has done so little to win over even a small part of the opposition.

—that what is needed is the broadest possible coalition, the biggest imaginable tent in which to gather the forces against the autocrat.

It should not really be as hard as it is threatening to be.

9. History has its eyes on you.

This quote from “Hamilton,” and the very fact that, not long ago, that work, with its image of glorious diversity, was the one great American entertainment,

should remind us of how rapidly and suddenly political waves can crest and take over.

The contingencies and chances that come with political life are far greater than its destinies and certainties.

Any attempt to trace our current crisis to some inexorable pattern laid down in 1964 or 1980 or even 2007 is absurd.

—a Presidency that had seemed to many impossible to imagine, and that, as hard as it is for progressives to accept,

was sufficiently radical to inspire the wild reaction that we are living through now.

History is made by lost regiments, late-arriving cavalry, or, in this case, by tens of thousands of votes hived off here and there in Midwestern states.

Nothing is written, or fated, or certain, and, as momentous as this election will be, no one knows its outcome, which will depend as much on the tiny fractals of chance as

on some inexorable plot in history.

One last quote from “Hamilton,” again, to coax us all out of the sudden, enforced numbness that many feel.

There has been, perhaps, in the past three years, an undue lack of passion in the opposition to Trump’s degradation of democracy into Putin–Orbán-style autocracy.

Too much trust, perhaps, was placed in the workings of constitutional processes, culminating in the impeachment and acquittal.

During Trump’s term, there has been no march on Washington as large as the first Women’s March, right after the Inauguration,

no turn to mass protest as the fundamental anti-democratic nature of the Administration deepens.

The coming months are fateful for our democracy; everyone will be tested, and every vote will count if all these American ambiguities are, somehow, to be resolved.

Adam Gopnik, a staff writer, has been contributing to The New Yorker since 1986.
He is the author of, most recently, “A Thousand Small Sanities: The Moral Adventure of Liberalism.”