Scientists at Purdue University have made the fastest spinning object ever, a tiny ball of silicon dioxide that rotates 300 billion times per second.

They positioned the microscopic silica balls in a vacuum and blasted them with two different lasers that induce the spin.

In 2018, scientists at the Institute for Photonics at ETH Zurich (a small, elite science university) created the first billion-RPM object and said they hoped it would

accelerate, so to speak, the discovery of wild and unpredictable things.

And that has certainly borne out, because the Purdue team has shown that even in a near vacuum, the spinning silica particles create measurable friction.

One cool thing about the team’s research is that the setup didn’t require supercooling in order to detect even the most micro changes in torque,

instead working at room temperature.

“Moreover, we drive a nanoparticle to rotate at a record high speed beyond 5 GHz (300 billion rpm),” the team explains.

“Our calculations show that this system will be able to detect the long-sought vacuum friction near a surface under realistic conditions.” 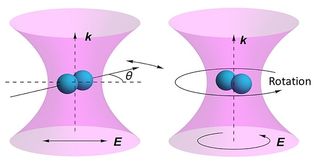 Hypothetically, an object in a true vacuum would never slow down based on air friction, but the vacuum itself is thought to create friction that will slow particles inside it.

This idea has accumulated a consensus in the last 10 years, but no one has been able to measure vacuum friction.

Enter the micro-scale silica gravitron, where the spinning particles could move fast enough to generate measurable vacuum friction for the first time.

“Torque sensors are also widely used in studying small-scale magnetism, the Casimir effect, and other applications.

Great effort has been made to improve the torque detection sensitivity by nanofabrication and cryogenic cooling,” the team explains.

The tiny, spinning silica ball can measure torque down to a quadrillionth of a newton-meter, or about 750 trillion pound-feet.

This improves on the previous best and, again, does it without special manufacturing or extreme temperatures.

Now, the Purdue team has made an optical nanorotor using a pulsing laser.

Scientists have made other nanorotors from folded DNA and other materials.

This optical nanorotor has been in development since at least 2018, when research team member Tongcang Li said it had topped 60 billion rpm.

“The super-spinner is made up of a silica nanoparticle, shaped like a dumbbell and levitated in a vacuum using a laser.

The laser can be polarised in a straight line or in a circle, and its the circular mode that produces the rotations,” Science Alert reported at the time.

“In other words, you might be hearing a lot more about this nanoscale rotor in the future.”

The research team is excited about vacuum friction, but that’s not the only good news.

“Our calculations show that this system will be able to detect the long-sought vacuum friction near a surface under realistic conditions.

The optically levitated nanorotor will also have applications in studying nanoscale magnetism and quantum geometric phase,” the scientists write.