Over the weekend, a bizarre roadside standoff on a major highway in Massachusetts stymied holiday traffic for nearly nine hours before ending in 11 arrests of people from a militia group called

Rise of the Moors, who law enforcement said described themselves as adhering to “Moorish sovereign ideology.”

A little before 2 a.m. on Saturday, a Massachusetts State Trooper noticed two cars stopped on Interstate 95 with their hazard lights on, and people outside the cars attempting to fill up their gas

tanks, so he pulled over.

They did not have licenses to carry firearms.

The men claimed they were traveling from Rhode Island to Maine for “training,” according to police.

They reportedly refused to put down their weapons, at least initially, wouldn’t show identification, and some fled into nearby woods while the officer called for backup.

“You can imagine, 11 armed individuals standing with long guns slung on an interstate highway at two in the morning certainly raises concerns and is not consistent with the firearms laws that we

In the pre-dawn hours, a standoff unfolded, causing police to close traffic on the six-lane interstate in both directions.

The militia wanted to be allowed to continue traveling to their destination, but the cops refused to let them leave, while trying to keep the situation from escalating to violence.

Mason said police worked with negotiation teams while using armored vehicles to gradually tighten the perimeter around the men.

At around 10:00 a.m., police arrested 11 people, including one 17-year-old minor, on several firearms charges, as well as conspiracy to commit a crime and use of body armor in a crime.

Some suspects were also charged with giving a false name to police.

Extremist experts have identified the Rise of the Moors as part of the sovereign citizens movement, made up of hundreds of thousands of people who believe they don’t need to obey U.S. law.

They have bedeviled law enforcement and other government workers for decades, with the Moorish-identifying offshoot representing just a small contingent of a larger extremist group.

Who are sovereign citizens, and what do they believe?

The sovereign citizens are a wide-ranging anti-government extremist group, according to the Southern Poverty Law Center.

Their core belief is that they don’t need to follow U.S. laws and shouldn’t have to pay taxes.

“They [believe they] don’t need to abide by laws and sometimes, depending on the circumstance, will actually go and commit criminal acts within this sort of ideology,” says Rachel Wasserman,

a research analyst for the SPLC who specializes in anti-government groups and sovereign citizens.

The ideology has roots in anti-semitism and white supremacy as well as conspiracy theories, including the claim that the government established by the founding fathers was,

at some point in history, secretly switched out for a new government that enslaved citizens.

Notorious for “paper terrorism,” sovereign citizens have been known to file fake tax forms to get enemies — often government workers — audited by the IRS,

or to use fraudulent property liens to try to steal their homes.

They are known for clogging court systems with hundreds of pages of filings protesting routine processes like having to buy a dog license or pay a traffic ticket.

Occasionally, in the past, sovereign citizens’ run-ins with law enforcement have escalated to violence.

In 2010, father and son sovereign citizens Jerry and Joseph Kane killed two police officers with an AK-47 during a traffic stop in Arkansas.

The suspects fled the scene before being killed in the ensuing shootout with authorities responding to the first shooting.

Violence like this caused the FBI to label some sovereign citizens domestic terrorists in 2010, and makes it all the more fortunate that the standoff on I-95 was resolved

without gunfire from either side.

“There absolutely is a threat from these groups,” Wasserman says.

“And people need to at least be aware of who they are and where they are.”

So who are the Moorish sovereign citizens? 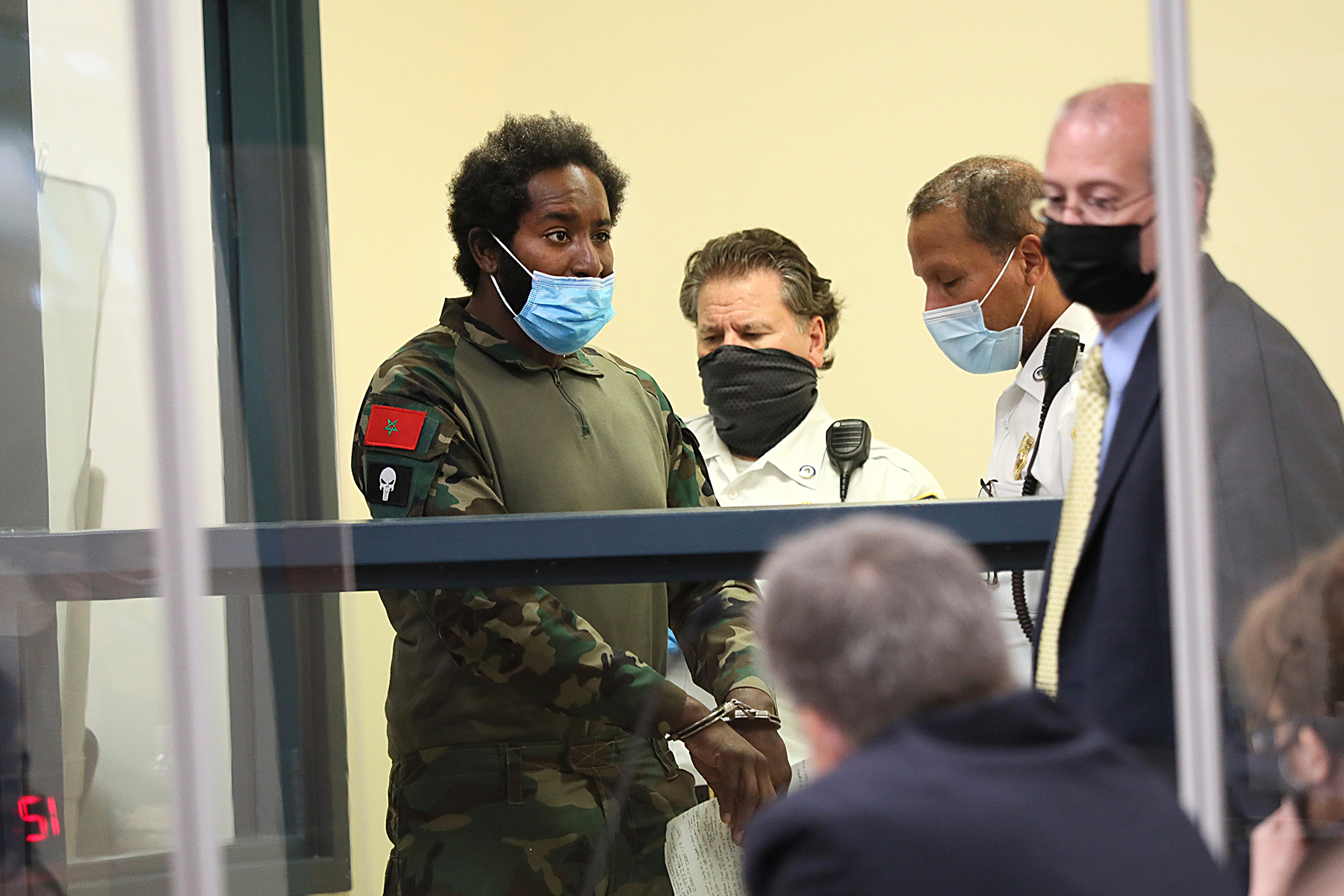 Quinn Cumberlander, left, one of 11 people charged in connection with an armed standoff along a Massachusetts highway last weekend, appears during his arraignment at Malden

According to Wasserman, they interpret sovereign citizens’ ideology through the lens of the teachings of the Moorish Science Temple of America, which was founded in 1913 by the Noble Drew Ali,

whom they consider a prophet.

According to the World Heritage Encyclopedia, Ali valued Islam and its teachings, and believed all African Americans were Moors descended from ancient Moabites in Northwest Africa

and that this history had been hidden from them.

His followers added suffixes like Ali, Bey, or El to their last names to signify their Moorish heritage.

The MSTA continues to be a small religious sect, separate from the Moorish sovereigns who co-opt its prophet and teachings to support their sovereign ideology.

“They, in fact, did have sovereigns in their ranks, and they made it extremely clear that sovereigns weren’t welcome,” Wasserman says, referring to the MSTA.

“I worry that people aren’t able to differentiate that there’s Moors [members of the religious sect], who are, for the most part, very peaceful, law-abiding citizens and Moorish sovereigns

who are sometimes peaceful but not nearly as law-abiding.”

Another group of Moorish sovereign citizens were in the news last week, as well, after TikTok user @regblackgrl documented a group’s attempt to commandeer her home.

They sent her fake legal documents, she said, claiming the house she’d purchased was the ancestral home of someone affiliated with Moorish sovereign citizens, and while she was away

they reportedly broke in and changed the locks.

Who was the specific group at the standoff?

Rise of the Moors is one group of Moorish sovereigns based in Rhode Island.

Wasserman has had this specific faction on her radar since they sued the Providence police department in 2019 for interrupting a lecture.

On the Rise of the Moors website, however, the group claims not to be a sovereign citizens group.

(Rise of the Moors did not immediately respond to a request for comment.)

A video on the group’s YouTube page appears to have live-streamed the encounter on I-95.

“We are not anti-government,” a man dressed in military attire says, gesturing to what appears to be the Moroccan flag.

“Our nation, which — our flag is right here — has a treaty with your government.”

He later adds, “We are not anti-police, we are not sovereign citizens, and we are not black identity extremists.”

At an arraignment on Tuesday, one suspect described the Rise of the Moors as a “well-regulated militia.”

According to Wasserman, a group’s cumulative behavior and rhetoric matters more than its claims.

are instead going to become part of a sovereign body,” she says.

“What matters is that they are in the U.S. and are in fact citizens; you cannot renounce your citizenship in a way that gives you the right to stop following U.S. law.