The House committee investigating the assault on the Capitol and what led to it is employing techniques more common in criminal cases than in congressional inquiries.

The House committee investigating the Jan. 6 assault on the Capitol has hired two former U.S. attorneys and more than a dozen other former federal prosecutors.

and terrorists as it seeks to break through stonewalling from former President Donald J. Trump and his allies and develop evidence that could prompt a criminal case.

In what its members see as the best opportunity to hold Mr. Trump and his team accountable, the committee — which has no authority to pursue criminal charges — is using what powers it

has in expansive ways in hopes of pressuring Attorney General Merrick B. Garland to use the Justice Department to investigate and prosecute them.

The panel has hired more than a dozen other former federal prosecutors.

The committee has interviewed more than 475 witnesses and issued more than 100 subpoenas, including broad ones to banks as well as telecommunications and social media companies.

Some of the subpoenas have swept up the personal data of Trump family members and allies, local politicians and at least one member of Congress,

Though no subpoena has been issued for Mr. Jordan, his text messages and calls have shown up in communications with Mark Meadows, the former White House chief of staff,

Armed with reams of telephone records and metadata, the committee has used link analysis, a data mapping technique that former F.B.I. agents say was key to identifying terrorist

networks in the years after the Sept. 11 attacks.

The F.B.I. said it used a similar tactic last month to identify the seller of a gun to a man in Texas who took hostages at a synagogue.

Faced with at least 16 Trump allies who have signaled they will not fully cooperate with the committee, investigators have taken a page out of organized crime prosecutions and quietly

turned at least six lower-level Trump staff members into witnesses who have provided information about their bosses’ activities.

The committee is also considering granting immunity to key members of Mr. Trump’s inner circle who have invoked their Fifth Amendment right against self-incrimination

as a way of pressuring them to testify.

“Having lived through and being a part of every major congressional investigation over the past 50 years from Iran-contra to Whitewater to everything else,

this is the mother of all investigations and a quantum leap for Congress in a way I’ve never seen before,” said Stanley Brand, a Democrat and the former top lawyer for the House

who is now representing Dan Scavino, one of Mr. Trump’s closest aides, in the investigation.

It is a development, Mr. Brand suggested, that Democrats might one day come to regret.

“When a frontier is pushed back, it doesn’t recede,” he said.

“They think they’re fighting for the survival of the democracy and the ends justify the means. Just wait if the Republicans take over.”

The committee’s aggressive approach carries with it another obvious risk: that it could fail to turn up compelling new information about Mr. Trump’s efforts to hold onto power after his

defeat or to make a persuasive case for a Justice Department prosecution.

Despite a swirl of new investigations since he left office, the former president remains the dominant force in Republican politics.

The committee has no law enforcement role, and its stated goal is to write a comprehensive report and propose recommendations, including for legislation,

to try to make sure the events of Jan. 6 are never repeated. 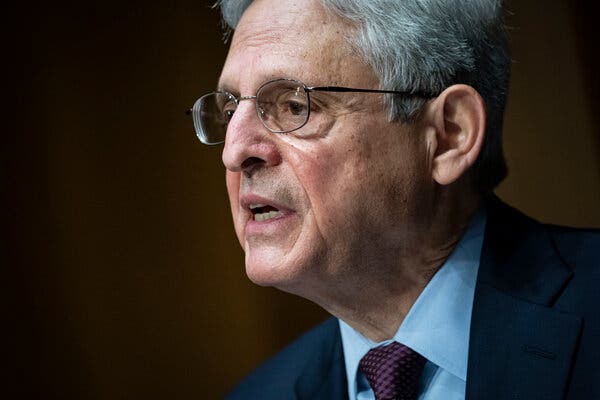 Nevertheless, its members have openly discussed what criminal laws Mr. Trump and his allies may have violated and how they might recommend that the Justice Departmen

Such a step could put considerable additional pressure on Mr. Garland, who has not given any specific public indication that the department is investigating Mr. Trump

or would support prosecuting him.

As the House investigation was gaining momentum late last year, the committee’s vice chairwoman, Representative Liz Cheney, Republican of Wyoming, read from the criminal code to

describe a law she believed could be used to prosecute Mr. Trump for obstructing Congress as it sought to certify the Electoral College count of his defeat.

Ms. Cheney and the other Republican on the committee, Representative Adam Kinzinger of Illinois, were censured by the Republican National Committee on Friday

for their participation in the investigation.

Mr. Trump’s allies have grown angry not just at the aggressiveness of the committee — for example, in making subpoenas public before they have been served

— but also at the expansive list of people questioned, some of whom, these allies maintain, had minimal to no involvement in the events of Jan. 6.

The tactics being used by the committee were described by nearly a dozen people, including members of the committee, aides, witnesses and their lawyers,

and other people familiar with the panel’s work.

Many spoke on the condition of anonymity because they did not want to be identified discussing what the committee says is a confidential investigation.

By comparison, the House select committee that spent two and a half years investigating the 2012 Benghazi attack issued just a dozen or so subpoenas

— a small fraction of the number issued by the Jan. 6 committee so far — and made no criminal referrals.

The Jan. 6 panel has already recommended criminal contempt of Congress charges against three witnesses who refused to cooperate, and one, Stephen K. Bannon,

has already been indicted  by the Justice Department.

Members of the Jan. 6 committee say the obstacles thrown up by Mr. Trump and his allies and the high stakes of the investigation have left the panel with no choice
but to use every tool at its disposal.

“It’s not a criminal investigation, but having experienced former prosecutors who know how to run complex, white-collar investigations working on a plot to overturn the presidential

election is a very useful talent among your team,” said Representative Adam B. Schiff, Democrat of California and a committee member.

To lead the inquiry, the panel hired Timothy J. Heaphy, the former U.S. attorney for the Western District of Virginia.

In that position, he oversaw a number of high-profile prosecutions, including one in which the drugmaker Abbott Laboratories pleaded guilty in a fraud case and paid a $1.5 billion fine.

He is a senior investigative counsel for the committee and is focusing on Mr. Trump’s inner circle.

Neither Mr. Heaphy nor Mr. Wood had previously worked on a congressional investigation.

Some of the Democrats on the committee were concerned that if the panel was too aggressive, Republicans might turn the tables on the Democrats

whenever they took back control of the House.

But Ms. Cheney insisted that the committee be as aggressive as possible.

She said that the panel would face significant resistance from Mr. Trump’s inner circle, and that the committee would be criticized no matter what it did,

so there was no reason to hold back in the face of efforts to impede its work.

Mr. Trump moved to block the National Archives from handing over documents from his White House, leading to a monthslong court fight that ended

with the committee receiving the documents.

At least 16 witnesses have sued to try to block the committee’s subpoenas.

Four of the panel’s most sought-after targets — the conservative lawyer John Eastman; Jeffrey Clark, the Justice Department lawyer deeply involved in Mr. Trump’s plays to try to stay in

power; the conspiracy theorist Alex Jones; and the longtime Trump adviser Roger J. Stone Jr. — invoked the Fifth Amendment as a way to avoid answering questions without the threat of a

— told the committee that they would refuse to sit for questioning.

Despite those obstacles, the committee turned its attention to lower-level aides, who investigators knew were in the room for many of the key events that occurred in the lead-up to and

during the assault, or were told almost immediately about what had occurred.

Those witnesses tended to be younger and have far less money to hire high-end white-collar defense lawyers to fend off the committee.

So far, the committee has spoken to at least a half-dozen lower-level aides who fall into this category.

When Mr. Meadows, the former White House chief of staff, refused to testify, the panel turned to his top aide, Ben Williamson, who complied with a subpoena

and sat for hours of questioning.

After Mr. Clark, the Justice Department lawyer, refused to cooperate, a former senior counsel who worked for him, Kenneth Klukowski,

sat for an interview with the committee.

Representative Jamie Raskin, Democrat of Maryland and a member of the panel, said the committee was not trying to “flip” witnesses the way investigators might do in a criminal case.

But, he said, “If you drew some kind of social diagrams of who’s testifying and who’s not, pretty much everyone is testifying,

except for those who are in the immediate entourage of Donald Trump.”

Among the other aides who have testified before the committee are Marc Short, Greg Jacob and Keith Kellogg, all of whom worked for former Vice President Mike Pence.

The spokesman, Taylor Budowich, turned over more than 1,700 pages of documents and sat for roughly four hours of sworn testimony.

Shortly after testifying, Mr. Budowich learned that the committee had requested financial records from his bank related to pro-Trump rallies.

A federal judge turned down an emergency request by Mr. Budowich to force congressional investigators to relinquish his banking records,

which JPMorgan Chase had already given to the committee.

Investigators also sought a broad swath of phone records from Ali Alexander, a right-wing rally organizer who was cooperating with the committee, for two months before Jan. 6, 2021

— well before he claims to have thought of planning an event that day — and for one month after.

Late last month, another example of the panel’s investigative approach emerged. Mr. Jones, the conspiracy theorist, who has sued the committee,

was questioned by investigators in a virtual interview.

He later said on his radio show that in the interview he had invoked his Fifth Amendment privilege against self-incrimination nearly 100 times.

“I just had a very intense experience being interrogated by the Jan. 6 committee lawyers,” he said.

“They were polite, but they were dogged.”

Even though Mr. Jones refused to share information with the committee, he said the investigators seemed to have found ways around his lack of cooperation.

He said the committee had already obtained text messages from him.

“They have everything that’s already on my phones and things,” he said.

“I saw my text messages” with political organizers tied to the Jan. 6 rally.

….. this is the space I reserve for myself …#ReservedParking …. to come back to … which often occurs …not yet